Growing up, whenever we traveled to Venezuela, the relatives we visited most were on my mother’s side. She had five sisters and a brother, and collectively she and her siblings had six spouses and 23 kids, which made for robust family get-together’s, lots of dancing, and plenty of tasty, Venezuelan dishes. 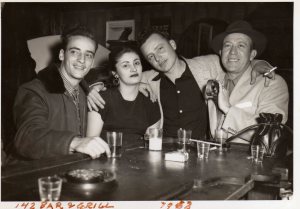 Yet of all my uncles, the one who was most dear to me was on my father’s side and we didn’t have to fly to Caracas to see him. Like us, Tio Emilio lived in New York, just a train ride away. And yet we didn’t see him much and we never visited his home. Tio Emilio had a wandering soul and wherever he went, he seemed to have one foot out the door. Which is probably why he joined the United States Navy and why he now worked for a cruise line. To see the world. But when he returned, it was always a big deal.

I wasn’t sure what his job on the ship was, but I imagined he was a world-class chef, preparing culinary delights for the passengers. Later, I learned that he was more of a cook’s aid, washing dishes and peeling carrots. It didn’t matter. In our home, he was our very own master chef, whipping up sumptuous meals for all of us.  Hands down, his was the best Venezuelan paella I’d ever tasted.

A visit from Tio Emilio generated much excitement. My mother would put on her best dress and bring out the fine china. She’d then follow my uncle around the kitchen as he chopped, basted and stirred. Like a shadow, she’d be ready to provide him with his every need. Olive oil? Check. Garlic? Check. Green pepper? Raisins? Check, check.

Scooping up the chopped onions and garlic, he’d toss them into the simmering pan. He’d wait for the onions to turn translucent before adding the peppers, tomatoes and saffron. All the while, Tio Emilio would sip wine and smile serenely as the aromas from the pan signaled his masterpiece would soon be ready.

While my uncle worked his magic, my mother would regale him with the family stories he had missed while away. How I loved to see them together! They were as one in the kitchen—laughing, chatting and drinking, truly enjoying each other’s company. Which is why I hated the long spells of not seeing my uncle.

He appeared and disappeared months at a time.  When is he coming back?  My parents wouldn’t say. Years later, I learned the reason for the long absences. My uncle was living a double life: the one we saw and the one we weren’t allowed to see. Turns out, my uncle was gay.  Don’t ask, don’t tell.

I wondered what it must have been like for him to have to hide this part of his life from us and, I assume, from the world at large. In a way, I was jealous of those in his inner circle, the ones that knew him in a way I could not. At the same time, my heart went out to him, for not being able to live openly, freely. I wanted to let him know it didn’t matter to me.  But I never said a word. “Don’t ask, don’t tell” was our motto long before the words took meaning.  Eventually, I moved away from New York and saw my uncle even less.

Then one day, my father called to tell me my uncle had died. Cause of death was kept as hidden from us as his homosexuality once had been. I heard he died from alcoholism. I later heard it was complications as a result of being HIV positive. It didn’t matter. Silently, in the darkness of my Seattle home, I mourned for my uncle and for all that could have been.

A few days later I received a package in the mail with a note written by my father:

“Hija, your uncle wanted you to have this.”

Peeling away the layers of brown wrapping and tissue paper, I discovered a photo album simply labeled, “Fotos de Emilio.” It was filled with black and white pictures depicting his life as a gay man, intermingled with a few photos of his nieces and nephews. Here, at last, both worlds came together as one.  Pictures of his world travels and of time spent with friends and with family.  My uncle. How handsome, how debonair.  A kind and tolerant man, who lived his life with civility and solitary dignity. Here was the life he never spoke of, but in the end he wanted me to know. In his own way, my uncle was telling me, this is what mattered most. This was his legacy to me.