I mean, no one brought along a famished Barbie. So you stare down the waiter who placed that bit of nonsense in front of you and declare, “What are we supposed to do–pass the glass around and inhale the bread??” END_OF_DOCUMENT_TOKEN_TO_BE_REPLACED

For me, nothing evokes the holiday like the Macy’s Thanksgiving Day Parade. Growing up, watching the parade, sometimes in person, was a staple in my family. END_OF_DOCUMENT_TOKEN_TO_BE_REPLACED

Growing up with nearly all of my family living within a five-mile radius of our apartment building was a mixed blessing: no matter the occasion, Christmas to christenings, anniversaries to Arbor Day, you knew exactly who was going to be on the guest list, jostling you at the cramped buffet table and beating you to the only bathroom. And even if it was your birthday celebration and you wanted to invite your friends, family trumped all and you knew exactly who was going to make the guest list. END_OF_DOCUMENT_TOKEN_TO_BE_REPLACED

Here are words you’ll never hear from me:

Which means, if you were hoping to run into me while out shopping on Thanksgiving Day, don’t count on it.

If you were expecting to see me screaming like a banshee as I race down the aisles of Walmart in search of that one of a kind, must-have-or-I’ll-die-deal, don’t hold your breath.

Maybe you thought you’d catch me in the wee hours of the morning, END_OF_DOCUMENT_TOKEN_TO_BE_REPLACED

Just got back from Chicago and all I can say is:

Talk about windy.  Sure, I know Chicago is known as the windy city. But I figured that was just a figure of speech. Much in the way New York City is known as the Big Apple.

I mean, everyone knows that NYC really isn’t an apple, right? There’s nothing about it that tastes like a Granny Smith or a Red Delicious, is there? So, I just assumed Chicago really wasn’t windy. At least, no more than any other city.

But, no. Turns out Chicago is 100 percent, honest-to-goodness windy. Wizard of Oz tornado-in-Kansas windy, though I didn’t see Miss Gulch flying by on a bike.

In fact, those Chicago gusts nearly knocked the wind right out of my sails, and any determination I had to face the crowds on Black Friday were immediately dashed.

Ready for the holidays at the Art Institute of Chicago

So, maybe skipping Black Friday was for the best. After all, I find that for every gift I purchase, I usually end up buying a second for myself.

So what did we do instead? For starters, we stayed in and puttered. We ate leftover turkey and all the fixings, caught up on our magazine reading, and chatted and laughed to our hearts’ content.

We watched TV and lamented that one of our favorite new series, 666 Park Avenue, has been cancelled. We had a moment of silence for Larry Hagman, an actor who could channel evil like few others, and who was pure perfection in his role of J.R. Ewing on the Dallas TV series.

We did venture out on occasion. Once to see the film, Lincoln, which was then followed by a lively debate on the complexities of the man and what it took to get the U.S. Constitution’s Thirteenth Amendment–the one outlawing slavery–passed.

We also spent an afternoon at the Art Institute of Chicago, saw the Chicago Symphony concert perform music from the Disney film, Fantasia, and dined at a very nice restaurant.

And, did I tell you it was freezing?

Of course, when the temps warmed a little, I got to enjoy one of my favorite pastimes, taking walks around a nearby lake.  Herewith, some photos from my trip:

A walk along the lake. 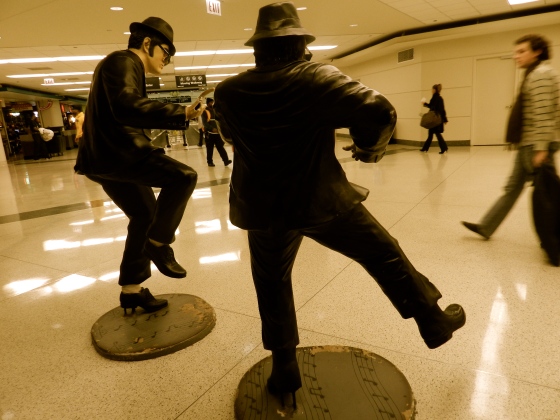 At the airport, a chance encounter with the The Blues Brothers.

So, what did you do last week?