Henry is having a midlife crisis. There’s no mistaking it.

For starters, he’s reverted to his puppy years, no doubt remembering the months he spent in a child care center where he’d see infants using pacifiers and started using them, too. Here he is again, a feeble attempt to relive his youth. END_OF_DOCUMENT_TOKEN_TO_BE_REPLACED

I’ve always said, nothing but the best for my dog, Henry. As a Cavalier King Charles Spaniel, he has royalty in his blood. Which is why, when he was a mere pup, Henry went to daycare.  And not a daycare for pets, mind you. Henry was enrolled at the best home childcare center for little tykes in the county, and it is run by my very good friend, Gale (who, you might remember, is the Real Ms. Fix-it).

Henry wasn’t really enrolled in Gale’s daycare, but two days a week, I’d drop him off on my way to work so he wouldn’t be alone and miserable all day, pining for me.  As soon as we pulled up in my car, Henry’s heart would start racing with anticipation. He couldn’t wait to get inside. He’d jump excitedly out of the car and make a beeline to the front door.  Whereupon, he’d look at me expectantly and bark, as if to say,

“Chop-chop! What are you waiting for?  Let me in, already!”

Once inside, he’d run eagerly through the kitchen, past the family room, and out the door to the backyard where he’d check out the kid action, then return inside to play with Gale’s dog, Blanca. Well, sort of. Blanca was a bit older and it was all she could do to tolerate Henry and his wild, puppy antics. 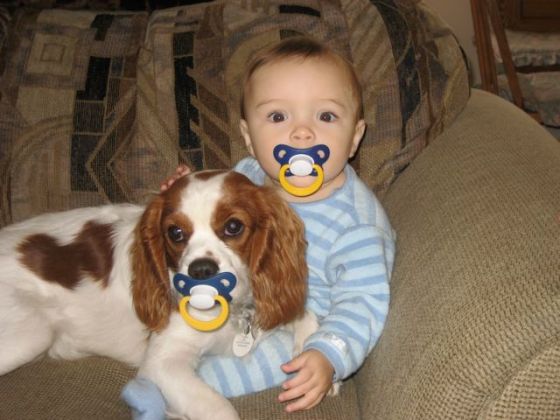 But while there, Henry developed an unusual obsession–a fascination for pacifiers.   Yes, it wasn’t long before Henry discovered pacifiers and became obsessed with watching the kids use them. He’d stare intently at a child’s mouth, patiently waiting for the pacifier to drop to the floor. Maybe he’d wait five minutes. Maybe longer. He knew that inevitably, the pacifier would fall, and when it did, it was his. The big pay off!

Henry developed many a strategy for swiping pacifiers from innocent babes. He’d feign interest in playing with the toddlers and run and let them chase him in the yard, all the time keeping his eyes on the prize–until he hit pay dirt. Bingo! He’d also watch them at snack time, sucking on their pacifiers, while playing with their Cheerios. As soon as a child reached for the cereal to put in their mouth, the pacifier would pop out and land on the floor. Henry was on it like a hawk swooping down on a mouse. That dog owned the ground and any pacifier that fell on it was his.  I’m pretty sure that Henry’s obsession led to a shortage of pacifiers that year.

I never did figure out why Henry had such a thing for pacifiers. Could be he liked it for the same reasons little ones like it–for teething or for the comfort it brings. Or maybe he just wanted one so he could feel like a kid, himself. No matter the reason, he sure did love sucking on them.

It’s been a while since Henry went to daycare and pinched a pacifier or two. Now, he’s a stay-at-home dog with no more unlimited access to his obsession. Though occasionally, he does find a discarded or forgotten one when he takes a walk in the park.   And every year, for his birthday, I let him be a kid again. I buy him a pacifier of his very own.

© Monica Medina and monicastangledweb 2010. Unauthorized use and/or duplication of this material without express and written permission from this blog’s author and/or owner is strictly prohibited. Excerpts and links may be used, provided that full and clear credit is given to Monica Medina and monicastangledweb with appropriate and specific direction to the original content.
Loading Comments...
%d bloggers like this:
%d bloggers like this: