Today was my father’s birthday. He would have been 99 years old. In honor of the anniversary of his birth I’m thinking of pineapple upside down cake.  For that is the cake my mother would bake, year after year for his very low-key birthday celebration. It was his favorite kind of cake and it soon became mine, too.  How I looked forward to my father’s birthday, just to have a slice of that once-a-year cake, lovingly made for a one-of-a-kind dad.

And if I learned anything from my father, it’s just how important family is. He loved us with complete devotion and indulged us whenever he could. I’m pretty sure he would have given us the moon if he had figured out a way. And yet, as good as he was as a father, he could also be at times exasperating, frustrating, and impossible.

When he died, almost 17 years ago—and just five months after my mother’s passing—a cousin put it like this:

“Your poor mother. Your father only gave her five months of peace. Now he’s up there with her, surely giving her a hard time again.”

What’s done is done and it doesn’t matter now.  My father is gone and we are left with genuine appreciation for what he did for us, and the legacy he left behind. My brother, Cesar, has put his feelings to words, summing up a life worth living in a way that has humbled me, and given me pause. For me, it is a good reminder of what I once had and I find myself comforted by his remembrances. Cesar writes:

This is how I remember him.

He moved his family to the U.S. to take care of Jose Enrique (my father’s son from his first marriage), who needed hip surgery as a young boy. Because of my father, Jose Enrique got the best medical attention in the world.

He took a job in the States to be with his family.

He loved having us sing in the backseat of the car.  And he would take great pleasure taking us to the beach and then seeing us play on the trampolines, which we passed on the way home.

He attended and studied, and put himself through New York University—at the age of 52.

During that time, he studied the rules of baseball so he could volunteer as an umpire, just so Rafael (our brother) and I could play Little League Baseball.  I think we played Little League for four or five years with my father ump-ing the whole time.

He put four kids through college; three of them attending expensive, private universities.

I remember my father driving to Boston, to pick up Regina (our sister) from school, loading her stuff in the car and then driving back to Long Island in the same day.

I remember my father, at age 70, standing on a ladder on top of the inclined roof of the garage, painting the house.

I remember my father, at age 74, driving an hour and a half to my house in Westchester so that he and my mother could visit their granddaughter.

I sincerely hope there’s a heaven and that they got there ok.

My world in Queens, circa 1960, revolved around my mother. To me, she was the end all. The bee’s knees. The most beautiful mother who was always there for me. My father, on the other hand, was of a different ilk. He wasn’t around much and didn’t go with us on family outings to the city. But that’s probably because he was spending his time downtown, getting an education. 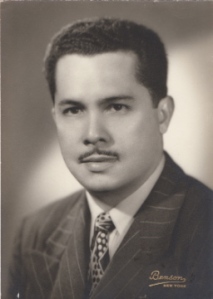 It seems that when he came to the United States, my father decided that if he was going to make a decent life for himself and for his family, he first needed to get a degree.  He enrolled at New York University and he must have been there day and night, attending classes and studying late in the library, because his presence in our lives was minuscule at best.

And when he was around, he would yell and throw fits about anything and everything which absolutely terrified me.  He also enjoyed a good scare.  Like when he crept up on me when I was by myself in the basement, sent there to fetch the laundry basket for my mother.  Pouncing, he began to make strangling motions around my neck.  I cried in horror, which made him keel over with crazed laughter. I was only five.

Yet, despite this, my father had his “Father Knows Best” moments. At least when he wasn’t in his hyper Latin machismo mode. Like when I was 18 and about to go on an interview for a summer job. I had applied to be a live-in nanny for the Pellicane family’s four children (three boys and a girl).  My father insisted that he come along for the interview so that he could meet the family with whom I might be spending the summer.  He poured on his Latin charm for Mrs. Pellicane, taking her hand gently in his, admiring her well appointed Manhasset home. A regular Desi Arnaz meets Ricardo Montalban. During the interview, he asked questions and offered anecdotal information about his daughter (“She’s shy,” “A picky eater,” “Very impatient.”). I sat meekly beside him, silently mortified, and willed myself to disappear into the furnishings of the Pellicane home. I wanted to forget this interview ever happened. But the next day, when Mrs. Pellicane offered me the job, she cited as the key reason the fact that my father cared enough about me to take part in the interview.

Over the years, my first inclination would be to seek out my mother when I needed advice. Not my father. I considered him bull-headed and demanding. Yet, he was always there in the background, trying to be as invaluable to me as my mother.  I resisted. That is, until my marriage began to fall apart.

My mother had been diagnosed with Alzheimer’s. Confiding in her was out of the question. I needed to talk, to get her insight, but since that wasn’t going to happen, I found myself turning to my father. He was 81 years old now and didn’t seem so macho anymore. During this time, my parents had moved to Florida and my father was receiving regular kidney dialysis. His legs were swollen, his body drained and he was just plumb tired of living. But his mind was intact.

The first time I called to tell him the news about my marriage, as a reflex, I braced myself for a scolding. I expected angry outbursts. I expected accusations that it was my fault, that I could have done more.  I anticipated unequivocal fury.  In its place, I got empathy and love. He listened as I cried and poured out my story. He quietly listened and when I could cry no more, he told me what I needed to hear. That he loved me with all his heart and that I would be ok.

Suddenly, with my mother in her own world, my father was there for me in a way I’d never seen before. It was as if my mother’s pre-Alzheimer’s spirit had taken over his body and, in a surprising twist of fate, it was now my father listening to me and sharing his wisdom.  I knew he was in pain from the dialysis, but during our conversations, he never let on.  It was the closest we’d ever been.  My mother now in la-la land and my father a beacon of hope and compassion.  The world was upside down and the impossible had come true.

Within the year, we buried my mother.  A few months after that, my father.  Hot headed and super macho, my father transcended all that he was, in order to give me what was there all along: his love. And maybe he didn’t always know best, but in the moments I needed him, he came through.