Salzburg proved to be my favorite city on our European tour. It is where much of The Sound of Music film was made.

If you were to ask me what are my top ten films of all time, I’d be hard pressed to give you just ten. Chances are, by tomorrow, I’d have a different top 10, because, frankly, there are so many great films out there. Besides, my list would undoubtedly change, depending on my mood.  But there’s one film that will always be in my top 10:

The Sound of Music

That’s why, for me, the hills are always alive!  And, when I close my eyes, I’m forever 16 going on 17. When I take a walk with Henry, I’m really climbing every mountain, searching high and low. And, I always have confidence that spring will come again, while my favorite things will always be snowflakes that stay on my nose and eyelashes.

Yes, I love everything about this film—the music, the story, the children, and the house they lived in. The first time I saw it, as a child, I recall how I especially loved the Von Trapp children.

Of course, my favorite was Angela Cartwright who played Brigitta. She was the only one of the kids I recognized from TV. She was already a household name, as one of the stars of a popular sitcom called, Make Room for Daddy, featuring Danny Thomas as the dad. I thought she was totally cute and would make the perfect friend, should I ever run into her in Queens, which, alas, I never did.

I also remember developing a deep crush on Christopher Plummer who played the Captain. OMG, those stern, narrow eyes that twinkled the moment he realized he was in love with Maria. That half smile and the uniform he wore. That whistle! Thinking about him still gives me goose bumps. Sigh.

Yes, I just adore The Sound of Music! Which is why, when I was planning my trip to Europe I decided I had to make a stop in Salzburg just so I could take The Sound of Music tour.  And, hands down, it was one of the highlights of my trip!

After all, that movie was released in 1965, and the tour remains one of the most popular activities for visitors to Salzburg, with several different tours offered, but only one is the original tour. Not being one to accept substitutions, that’s the tour I took.

But, I don’t give a hoot whether the Rogers and Hammerstein version is real or not. If you ask me, The Sound of Music has it all—music, drama, humor, suspense, romance, gorgeous scenery, curtains for making outfits to frolic in, and Nazis.

Besides, the Von Trapp family were real, weren’t they?  So that makes the film true enough, in my estimation. Or at least, as Stephen Colbert might say, there’s some “truthiness” to the tale.

The Sound of Music will live eternally in the hearts of millions all over the world, including this Latina from Queens, who, upon arriving in Salzburg looked for the nearest hill to climb, so that I could belt out the opening song, but all I could find at the train station was an escalator.

Good enough, I thought, as I stepped on the moving stairs and broke out in song,

“The hills are alive with the sound of music!”

Well, so much for my moment in the sun. Herewith, some photos from our Sound of Music tour: 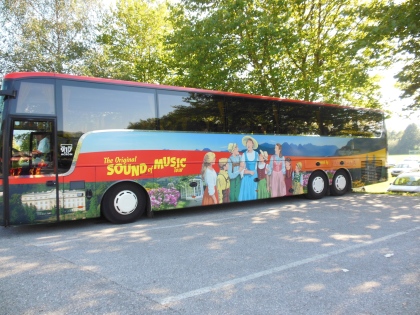 Maria splashes the water in this fountain while singing, “I Have Confidence.” 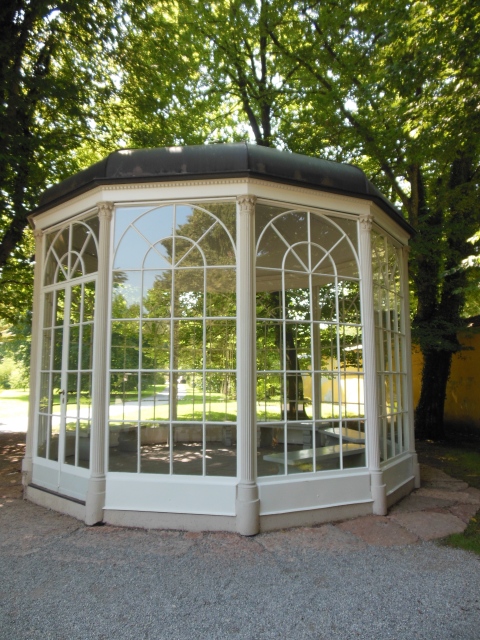 The gazebo, which was built by the film crew, was left as a gift to Salzburg after production ended. The interior dance shots were filmed in a studio, as the gazebo itself was not big enough to accommodate all that prancing around. 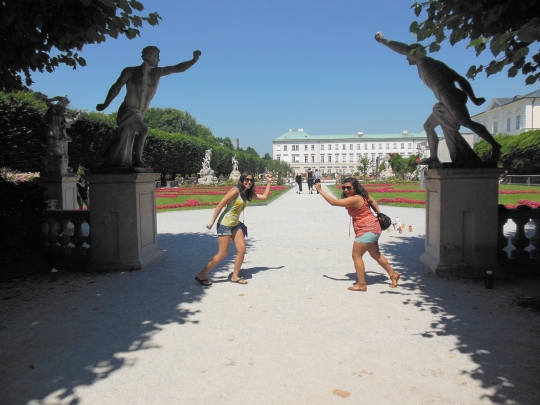 My daughter and her friend, who accompanied us on our trip, reenact a scene from the “Do-Re-Mi” number.

Recognize this shot from the film?

The home used in a scene depicting the rear exterior of the Von Trapp house. 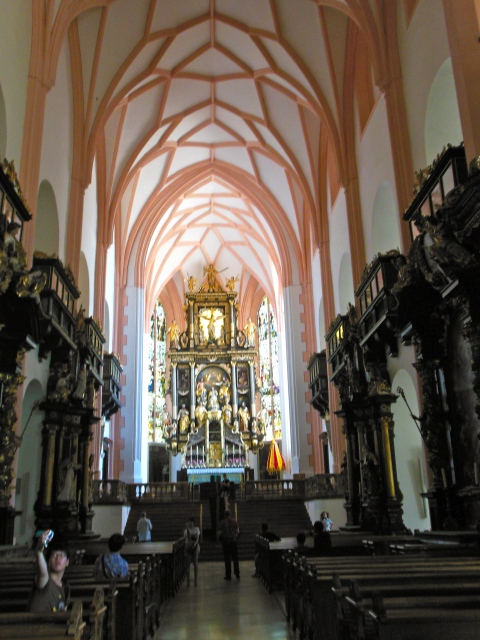 The only interior scene actually shot in Salzburg was the one in which Maria and the Captain marry.

The hills really are alive! 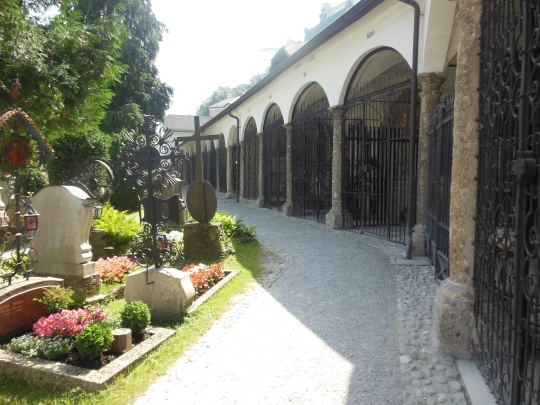 This cemetery inspired the set where the Von Trapp family is hiding from the Nazis, and Rolfe, the messenger boy blows the whistle on them. The actual scene was filmed on a set in Hollywood.

I once told you that I love statues. I snapped this picture right after a storm, in the Mirabell Palace and Gardens, where Maria and the children performed, “Do-Re-Mi.”

If you’ve ever been to Salzburg, I’d love to know what you thought of this city. But if you haven’t been here, is there a place you’re hankering to visit, where one of your favorite films was made?

Don’t you just love the Marx Brothers? (For those of you not familiar with them, start by watching Duck Soup. Then, watch A Night at the Opera, and Horse Feathers. I promise you, the Marx Brothers will absolutely tickle your funny bone.)

Of course, Groucho was my favorite.

Some would say, Harpo, with his big curly wig, wide eyes and childlike manner, was the adorable one. You could just hug him and his horn, and I’d certainly agree.

Chico was the romantic one, who’d bungle his words,with his phony Italian accent. He also knew his way around a piano.

Zeppo was supposed to be the handsome, straight man, by which I mean, he wasn’t a comedian at all, but more like a board. His only purpose seems to be to serve as an object for which his brothers could bounce their jokes off of. To me, he was a fish out of water next to his talented and gifted, comedic brothers.

But of all the Marx Brothers, Groucho was THE one. He was the witty, bold and cracker smart one, right down to his signature cigar, and greasepaint mustache.  (Bonnie’s Blog: The Balcony and Beyond, has a wonderful tribute to Groucho, so I encourage you to check it out, to learn more about his comic genius.)

Who else, but Groucho, could get away with lines such as: 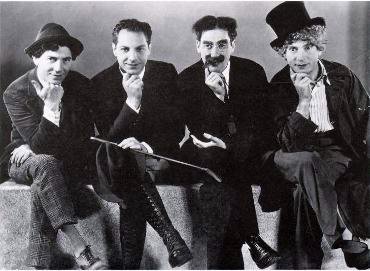 Groucho Marx delivered his lines with rapid fire. Blink, and chances are you’d miss his snappy repartee, and his hilarious facial expressions—a roll of the eyes, a raised eyebrow, a quirky look.

He sang many a song in his movies, but the one I love best is the one from Animal Crackers. “Hello, I Must be Going.”

Which is a fitting way for me to start, and end, this post. For, I’m going, too. On hiatus, that is.

I’m going to miss you, and miss reading the many wonderful blogs I follow. I’ll also miss our interactions and the laughs. I just love the blogosphere, but sometimes life gets in the way, and vacations happen.

And, while I’m away, I’ll be taking photos of all the beautiful scenery I encounter, and keeping a journal of my adventures, which I hope to share with you when I return. Until then, arrivederci. Ciao, Toodles. Hasta la vista. Until we meet again.

While I’m away, feel free to check out and leave comments on past posts. To paraphrase Maria von Trapp, start at the very beginning. It’s a very good place to start. When you read, you begin with A, B–oh, never mind. You get my point!

Newbies to my blog will learn so much more about me, while, for the rest of you, it’ll be like a walk down memory lane. 😉

So, what are your plans this summer?  Do share!