I’m not here to tell you about Mamá’s letters. No. It’s what she included in her letters that I’ll always remember. END_OF_DOCUMENT_TOKEN_TO_BE_REPLACED

For me, nothing evokes the holiday like the Macy’s Thanksgiving Day Parade. Growing up, watching the parade, sometimes in person, was a staple in my family. END_OF_DOCUMENT_TOKEN_TO_BE_REPLACED

Not that anyone has asked, but I’ll say it anyway: I thank my lucky stars I grew up in New York.

I mean, when you think about it, when my parents left their country for the U.S.—just after World War II—they could have ended up anywhere. Today, I could be saying that I hail from Gainesville, Florida or, that I was born on a cattle ranch in Nacogdoches, Texas, assuming they have cattle in Nacogdoches. And, maybe if that had happened, I would be saying I like these places very much. 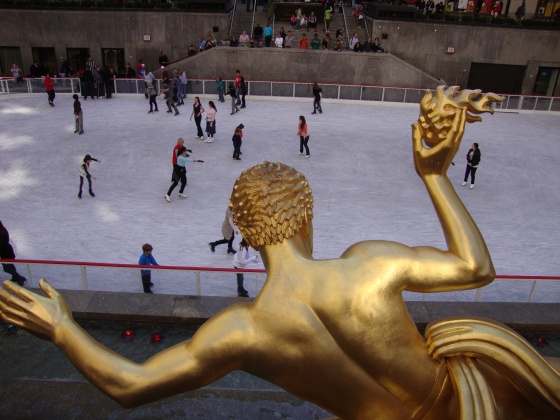 Or maybe, if their plane had been going at warp speed and shot right over the states, today I might be calling myself a Canadian. Not that there’s anything wrong with that. They have a beautiful national anthem, after all.

So, given the odds, it’s a wonder my folks made it to New York at all.  By the city that never sleeps. The Big Apple. Where Mad Men dreams come true. Home to Woody Allen, Lady Liberty, an empire state of mind, and, as it turns out–me!

Which means, I grew up shopping at the Macy’s flagship store in Manhattan—the very same one that inspired Miracle on 34th Street. I went to school at P.S. 154 and, later, to P.S. 117. We didn’t bother giving schools names; after all, New Yorkers don’t have time for such trivialities.

When I was a mere infant, my mother and her friend, who also had a baby, would push our baby carriages to the supermarket and park us out in front, while they went inside and did their grocery shopping. All the while, we, babies, would be innocently lulled to sleep by the cacophony of traffic on Main Street. Who had time for finding babysitters? The streets were our sitters!

Growing up in New York, meant class field trips to the United Nations, the Metropolitan Museum of Art and the Hayden Planetarium. Does it get any better than that? 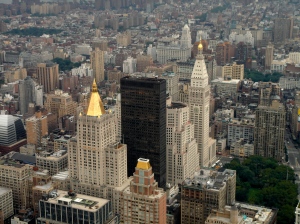 A view from atop of the Empire State Building.

Every time there was a new film playing at Radio City Music Hall, my family was there, listening to the organist play while we took our seats (boring!), and seeing a movie (the Doris Day films were the best!). And, when the film was over, it was exciting to see the fabulous, New York City Rockettes, tapping and kicking away, in all their glory.

Growing up in New York meant waking up at the crack of dawn to see the Macy’s Thanksgiving Day Parade, live and in person. We saw it in all kinds of inclement weather, with pummeling, freezing rain being the worst. Best of all, growing up in New York meant I got to see many Broadway musicals, like The Sound of Music with Mary Martin, and My Fair Lady, with Julie Andrews. I also got to see Here’s Love, a musical version of Miracle on 34th Street that flopped, despite my seven-year-old self, predicting to my school chum, that it would be a big hit.

Growing up in New York meant that, as a teen, I got to see up-and-coming journalist, Geraldo Rivera, and his One-to-One benefit concert at Madison Square Garden. The line-up included John Lennon, Stevie Wonder, Roberta Flack, and best of all, who can forget, Sha-Na-Na.

Growing up in New York means that I say “on line,” and not “in line” when I’m standing on a line and waiting my turn.

Being a kid in New York was so much fun that I’m hard pressed to find any drawbacks.

For, had I not grown up in NY, I would never have met Rod Serling in Central Park, back when he was still producing The Twilight Zone TV series.

I wouldn’t have been able to read the local newspaper to keep up on that nefarious serial killer, David Berkowitz, aka, Son of Sam. And how would I have ever found a $20 bill at the Flushing subway station if I wasn’t in Queens at the time? Or mastered my cool, aloof, don’t-bother-me stare, while assertively striding through the streets of Manhattan?

Perhaps, too, I would never have eaten gads of steaks at Tad’s Steak House, only to learn they weren’t serving steaks at all. Horse meat was the meat du jour. Talk about indigestion.

And, I probably would never have experienced the hot, sweaty platforms at the subway station in summertime, or the crushing sensation that you feel when you wedge the subway doors open as they’re closing, because, if you don’t, who knows when the next train will come along?

Or the mobs of people everywhere, sitting shoulder-to-shoulder in cramped restaurants, and dining so close you could almost kiss the stranger next to you on the cheek, but, why on earth would you?

I was raised in New York, which gives me carte blanche to call myself a New Yorker, or Nu YAWKER, depending on your accent.

New York and proud of it.

How about you? What makes your hometown special to you?