Another birthday, already?  How many times have I told you to stop these foolish shenanigans? Do I need to get a lawyer to make you cease and desist from throwing it in my face—the fact that you’re getting older? Think of all the times I begged you to be my little girl again. I don’t think that was too much to ask. Unrealistic, maybe, but miracles have been known to happen.

So yes, I know, this weekend is your birthday.  How can I forget, what with all I went through? Nine months of back pain, swollen ankles, heartburn, and elevated blood pressure. I suffered it all, and what do I have to show for it? 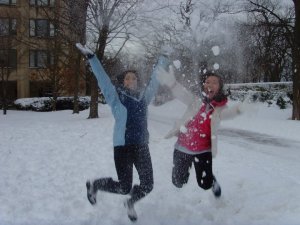 There you are, happily romping in the snow with your friend.

A 20-year old who’s off gallivanting somewhere far from home. Ok, so you’re in college. Dean’s List, too.  But did I ask you to go 2,000 miles away? Ok, so I did encourage you, but that was in the excitement of the moment when you were first notified that you’d been accepted at your dream school. We hugged and did a joyful dance. And yes, I did say, “Go, send in your acceptance!” But the next thing I knew, there you were, packing your bags and saying, ”So long, Mom” without batting an eye.

Twenty years old. The years have skipped by in a blur. One minute I’m cradling you in my arms and the next, you’re four, dancing in a ballet recital. Then, you’re 8 and going on your first Girl Scout camping trip. You’re 13 and preparing for your Bat Mitzvah. And now here you are, a sophomore in college, leaving me with only one thought:

When it comes to daughters, I couldn’t have done better than you.

So, Birthday Girl, I want to thank you for sparing me the grief other mothers of teenage girls so often go through. For regularly texting to let me know how you’re doing in school. For calling me when your work shift ends late at night, so I can keep you company on your walk back to your dorm. For all the love you’ve given me throughout these years. For enjoying my company as much as I enjoy yours. For being the caring, thoughtful daughter you’ve turned out to be. I know what you mean to me, and what I mean to you.

You left me verklempt recently, when you commented for the first time on this blog. It was regarding a post I wrote titled, If I Could Do it All Again. In it, I said I would have hugged my children more often when they were young, when they still loved hugging back.  You responded in a way that left me speechless:

“You got one thing wrong though, Mom…I STILL love hugging you back. In fact, I wish I could fly home right now just to get one of those amazing hugs that only you can give me.”

Well, Spring Break is already on the horizon and I’ll be seeing you soon, ready to hug you once more. Until then, when I think of you, I’ll be remembering the Martina McBride song that poignantly touches on how you make me feel:

If I could do it all again, I wouldn’t have believed I’d stay young forever and that time would never get the better of me. And I would have never sized up my parents, when they were in their 50’s, and thought, “Now that’s old.”

I’d have gone into marriage with my eyes wide open and made sure to keep the channels of communication going. I would have sought counseling long before any problems emerged.

I would have spent the $400 it cost to travel to Russia with my high school classmates.

I’d have spoken to my kids in Spanish right from the start, so that they could have grown up bilingual.

I wouldn’t have let vanity overtake me and dump my high school sweetheart just because he was a year younger, forever relegating him to, “The one that got away.”

I would never have let my mother’s broken English embarrass me. Ditto for her heavy accent.

I would have appreciated my college education more, studied hard and not skipped out on class. Ever.

I would have invested in Apple when they first came out with the iMac.

I would have gone to Europe in my youth.

I would have practiced piano daily and stuck with it. I also would’ve mastered ice skating and had a flair for figure eights.

I would have gone to Russia with my high school classmates on a two-week trip that only cost $400 per student.

I would have learned how to repair things around the house and change a tire. I would never have fallen for the old axiom that a husband would one day take care of me.

I would not have been irrationally terrified by Patty Duke, for her portrayal of Helen Keller, in “The Miracle Worker,” and I would not have convinced my seven-year-old self that she was lurking in the shadows of my childhood home.

I would have regularly eaten broccoli and acquired a taste for the nutrient-rich veggie.

I would have taken singing lessons just for fun, learn a third language like French or Italian, and started tap classes at age four. I would have joined a Girl Scouts troop, too.

I would have devoted myself to writing and be working on my sixth novel by now. Better yet, I would have come up with the idea for the Harry Potter saga first, leaving J.K. Rowling in the dust. And maybe I would have even written an eighth Harry Potter novel.

I would have called my parents daily and visited them every summer. Even holidays.

I would not have voted for the 2003 California Governor Recall simply because said governor had tripled the vehicle license fee.  I’m pretty sure the repeal of that fee increase is what led to the downfall of the state’s economy and helped put California in the dire straights it’s in today.

If I could do it all again, I would have hugged my kids more often when they were little and when they still loved hugging back. I would have held them tightly and treasured their childhood years, knowing that all too soon they’d be all grown up.

If I could to it all again, I’d memorize each joyful moment of my life, to relive over and over in my golden years.