My mother taught me a lot of things but there’s one thing she missed: she never taught me how to be handy. Nor did my father for that matter. While I was busy spending my childhood watching TV, writing my innermost thoughts in my secret diary and singing and dancing to show tunes around the house—where all the world was my stage—it would’ve been nice if one of my parents had showed me how to use a hammer and nail.

I did learn the proper way to wash the dishes by hand, how to make the bed, and how to write a thank you note. But face it, this was a different time, when not only was a woman’s place still in the home, but a young Latina’s place was preferably in a convent, under lock and key. In other words, being handy was for boys. 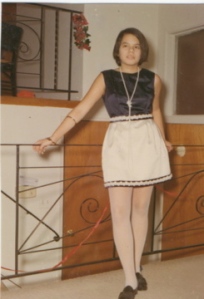 Getting ready for Charm School, circa 1970

And, you know how they say, it takes a village? Well the village didn’t help either. As soon as I reached high school, we were separated by gender: boys were put in Industrial Arts or shop class, where they learned how to construct, build and repair stuff. Girls were placed in Home Economics and I was no exception. There, I learned how to set a table, plan a menu, and the polite way to hold a glass of wine. No gender bias here.

Just in case I wasn’t getting it right, my mother enrolled me in Charm School, an eight-week course offered by the supreme authority on charm itself, the Sears and Roebuck department store. Yes, thanks to Sears, I learned how to walk, the proper way to engage in polite conversation, and how to hold a cup of tea. Graduation from charm school meant getting to participate in a “fashion show,” which consisted of a runway set up next to the Tools Department. It was all I could do not to trip over my chunky high-heeled, ultra teal shoes. If you ask me, walking on that runway was the closest I’d ever come to a wrench.

Which is why it now takes a village to attend to the maintenance of my home. Oh yes, I can stencil a pretty flower around the fireplace or choose a colorful throw for the couch, but don’t ask me to clean the air conditioning filter or replace the flush valve. That’s what professionals are for and why they get paid the big bucks. At least that’s what I’ve told myself when writing checks with multiple zeros at the end. That is, until I met Gale.

When Gale and I first met and struck up a friendship, I had no idea of her amazing, hidden capabilities. Unlike me, Gale is a very resourceful, self-reliant woman. More importantly, Gale has a heart of gold. I’d never met someone who could be described that way until I met Gale. The day she came into my life and saw that I was a fool for paying out all sorts of money for simple repairs, Gale took over, hook, line and sinker. She’s the original Ms. Fix-it who does it all out of love.

Gale has become my go-to friend. Fluorescent light on the blink? Call Gale. Toilet not running properly? Gale can fix that. Too much static on my phone line? Gale can fix that too. (Yes, turns out Gale was San Diego’s first female telephone installer, climbing 30 foot poles in a single bound.) She’s a real whiz who grew up with an independent spirit and promptly learned to fend for herself. Now she fends for me too.  A true blue friend with true blue know-how.

So maybe my parents didn’t teach me to be handy because they thought a husband would take care of me. Maybe it didn’t end up that way. Who knows? With Gale on my side I can’t go wrong. If ever there’s a problem, I know I can call Gale and if by chance she can’t fix it, there’s always the neighborhood plumber. Oh and Gale, if you’re reading this, I think there’s something wrong with the dryer.