I read an entire book!

So, take that, Fifty/Fifty Challenge!

Now, I know there are plenty of you out there who can read a whole new book every week and, frankly, I’m jealous. I’m sure, that for you, reading 50 books in one year is quite doable–as easy as making a run to Starbucks for a grande, no-foam, non-fat latte. 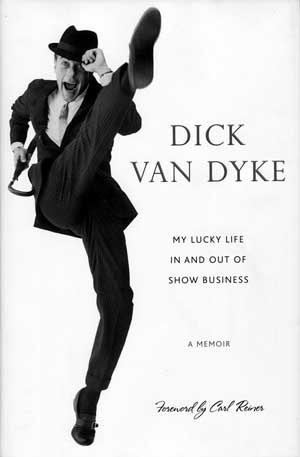 But, for me, 50 books in 12 months is Mt. Kilimanjaro–daunting, impossible and out of my reach.

So, imagine my delight when I was able to finish one more book in the month of September! Which brings my book quota to 14 so far this year!  With three months left to 2012, I’m so close to reaching my challenge goal. Right?

Well, I could start getting all despondent over it and sulk, but, here’s the way I see it:

So, what book did I read?

An autobiography titled, My Lucky Life in and Out of Show Business, a Memoir by Dick Van Dyke.

And, sure, the book was under 300 pages, but hey, at least it wasn’t one of those unauthorized autobiographies, if you know what I mean. At least, Dick Van Dyke approved what he wrote, which makes everything, in this “tell-all,” true!

Though, it wasn’t one of those juicy kind of tell-all’s at all. If you ask me, for a Hollywood star, Van Dyke led an ordinary life. Which, actually, is pretty refreshing.

Dick Van Dyke is one of my favorite comedic actors, hailing back to his days on the Dick Van Dyke Show, which was hilarious. Carl Reiner was the writing genius, who created the series, but Dick Van Dyke carried it, making it the perfect show for families to gather around the old television console and watch.

Remember the episode where Dick Van Dyke, as Rob, is remembering the story of how his son, Richie, was born, and the guy with the sandwich cart enters the office and somehow ends up spilling coffee on Rob’s pants? And, while Rob’s pants are sent to the cleaners, and he’s left in his boxers, Rob gets a call from Laura, his wife, to let him know she’s gone into labor? Which leaves Rob with no choice but to borrow Buddy’s trousers, that are way too short and wide for Rob. Throw in the police, a fender bender, a nosy neighbor, and a phone that ends up falling into Rob’s pants, and you’ve got the ingredients for one of the funniest and freshest sitcoms in TV history. Oh, Rob!

In his memoir, Van Dyke writes joyously about his lucky life. About his childhood, and how his parents would leave him alone in his crib when he was two, and go out on the town, and, how, when he was six, he’d babysit his younger brother, Jerry, while his parents went to the movies. He’s also candid about his personal struggle to give up drinking, his smoking habit, and his painful divorce.

The book also affirms what I always new: that Van Dyke is a nice guy who deliberately sought out to make the kind of films that families could see together. He’s a deeply spiritual man, too, who once considered becoming a minister, but then got the acting bug. He didn’t think himself a singer, but he loved to dance and do pratfalls. He loved making the film, Mary Poppins, but he didn’t like having to learn to talk with a British accent, as it proved very difficult for him. He married his high school sweetheart and together they had four children.

He is a man of compassion, speaking on behalf of civil rights with Martin Luther King, Jr., and later, when he was on his church’s board, suggesting that his all-white congregation reach out to the nearby African-American church in order to forge a relationship. But, when the other church members rejected his idea, he left the church for good.

He loved his career and shares snippets of memories of working with Mary Tyler Moore, Carl Reiner, Julie Andrews, Paul Lynde and Chita Rivera. He didn’t want to retire, but when it was suggested, during production of his last series, Diagnosis Murder, that the show needed to move at a faster clip in order to appeal to a younger audience, Van Dyke did not go “gently into the sunset.” Instead, he said this:

“Growing old is not a leper colony where an unfortunate few are sent to die. It is a precious gift given only to some lucky human beings.”

My Life in and Out of Show Business is a must-read for anyone who has fond memories of Dick Van Dyke.

In the Fifty/Fifty movie challenge, I’m doing so much better, having been able to watch a few films while my daughter was home for summer break. Among them:

Grey Gardens, an HBO movie starring Drew Barrymore and Jessica Lange. Based on a true story, Drew won an Emmy for her portray.

How to Lose a Guy in 10 Days, fun chick-flick with Kate Hudson.

The Company Men, good but depressing movie, starring Ben Affleck, filmed during the height of the economic downturn.

So, what books did you read? What films did you catch up on last month?