Late last night, while I was typing away at my computer, and Henry, my Cavalier King Charles Spaniel, lay cozily napping on my bed, I heard a voice whisper loudly, 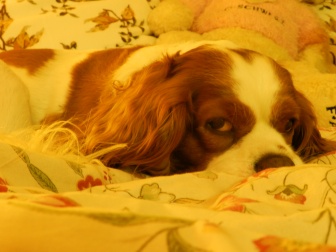 I looked up. No one was there. I resumed typing.

Again I turn around. Henry opened one eye.

He shook his head and fell back asleep.

Looking around the other way, I noticed the sound was coming from the vicinity of the TV.

“TiVo? What are you doing on at this hour? I haven’t watched you in days!”

“Days? More like weeks. I’m getting overloaded here. I’m going to pop a cable if you don’t start watching your shows soon. I can’t keep saving everything, you know. Something’s gotta give if you’re not going to watch, and I’m afraid it’s going to be me.”

“How do you think I feel? You used to love me and watch me all the time! Now, you only have eyes for that thing.” TiVo shrugs and aims it remote at my computer.

“One of these days? How about now? Parks and Recreation isn’t going to stay around forever, and besides, don’t you want to know if Leslie Knope wins the election? And, Revenge may be a dish best served cold, but not that cold.”

“And what about me?” came another voice from within the TiVo box.

“Oh, that’s Brian Williams,” TiVo responds.  “He’s getting a chip on his shoulder and is feeling snubbed. Wolf Blitzer isn’t too happy either, and, believe me, you don’t want to get him mad. I’m running out of excuses for you.”

“What do you mean? What have you been telling them?”

“First I told them that you were on vacation.”

“Where did you say I went?”

“TiVo, what did you say I was doing there? Going on some sort of Prohibition run?”

“Hmm…I hadn’t thought of that. Well, after a while they stopped believing it, so I said you were being held in North Korea where you were being forced to serve as a propaganda mouthpiece for Kim Jong-Il.”

“Did you get that idea from a 30 Rock episode in which Jack’s wife, Avery, was kidnapped and being held by the government?”

“Touché. Anyway, TiVo, have you gotten around to telling them the truth? That I’m busy with my writing?”

“No, I didn’t want to hurt their feelings. I might have said that you went off to Afghanistan and were hunting for Osama Bin Laden.

“TiVo, the Navy Seals got him a year ago.”

“Tell me something I don’t know. Remember you made me record that CNN coverage? You never did watch, but I did.”

“That’s because I ended up getting all my information from Twitter.”

“There you go again. Always with the computer or social media.”

“So, TiVo, what excuse are you giving them these days?”

“That you left for Antarctica to save the polar bears from extinction.”

“Yeah, I saw that on an episode of National Geographic.”

“TiVo, for crying out loud! Look, I’m on deadline. I’ve got to get back to my writing.”

“Okay, but no guarantees as to what you’ll find on your “Now Playing” list when you do return. I may just start recording my own recommendations and deleting yours.”

“Start watching and ease my load! Oh, and you can tell that dog of yours not to stare at me whenever I’m talking. Gives me the heebie-jeebies.”

“He does whenever he sees a dog in a commercial. Then he barks like a coyote at a full moon.”

“Ignore it. Just, go back and tell Brian, Wolf and all the others, the truth about why I haven’t been watching.”

“I think I’ll tell them you’ve just left for Spain to run with the bulls.”

“Excuse me, TiVo? What show did you see that on?”

“No, Lady and the Tramp on in-demand.”

So tell me, readers, do you have a DVR that’s overloaded and giving you grief? How do you manage your television viewing?

“Boardwalk Empire” is a new HBO series, which premieres this Sunday. I haven’t seen it, so I don’t know too much about it except that it’s based on a true story set in Atlantic City, once known as “The World’s Playground.” The buzz around “Boardwalk Empire” is, well, the best kind of buzz a new show could ever want. I have seen the promos and they have a sizzling energy that simply crackles. Excitement is in the air. Someone better warn Snooki and the whole lot of them at the “Jersey Shore” that the antidote to their idiocy has finally arrived. 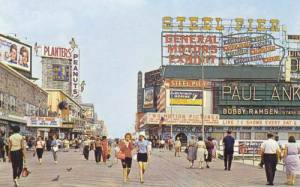 Now, anyone who knows me knows how many shows I watch and that it’s suicide to take on yet another one. After all, watching a series takes dedication, especially with Tivo making sure I never miss an episode. It’s like signing a contract. I need to make sure I’m prepared to be in it for the long haul (assuming it’s not cancelled after one season.) Plus, watching a series on HBO means no commercials to fast forward through, so an hour show really is an hour. Now that’s a commitment! Still, I am planning to add this show to my repertoire and I’ve already programmed my Tivo for a season pass, thank you very much. For “Boardwalk Empire” doesn’t just bring the promise of a high quality, superbly written drama. “Boardwalk Empire” might as well also be the story of my life. At least, my growing up years.

Sure, “Boardwalk Empire” is set in the Roaring Twenties and let me make it clear that I absolutely was not around then. But sometime during the fifties and sixties, my family could be found spending every summer there, on the boardwalk of Atlantic City. We’d wake up in the wee hours of the morning (my father liked to start out early to get ahead of the traffic) and groggily pack ourselves into the car, taking the Cross Island Parkway to the George Washington Bridge and over into New Jersey, then south on the Garden State Parkway. We’d arrive about 160 miles later.

Who can forget the smells of our summer haven—sea air mingled with salt water taffy and Belgian waffles that wafted through the breezes on the boardwalk? Who can forget Mr. Peanut himself, standing tall with his monocle and a broad smile that greeted us beach goers as we strolled aimlessly, without a care in the world?

I just loved Mr. Peanut and every year looked forward to seeing him tip his tall hat as if he was happy to see us return.

And what about the Steel Pier, once called the “Showplace of the Nation”? This was the place for kids. My brothers and I, with a few coins in hand, would be left here to our own devices—to explore the sights and sounds, and to enjoy the rides. Most of all, to have fun. No troubles, just three kids having the time of our lives. Hours later we’d all reunite to see an outdoor show which featured a woman on a horse diving 60 feet into a 10-foot deep pool of water. Amazing. Back then we didn’t know how dangerous it was for the woman and the horse, nor were we aware of any animal cruelty. Back then, we were just in awe. Yes, nothing beat Atlantic City where walking along the Boardwalk was more fun than the beach itself. Taking in the scenery, the good times, and the feeling that we were kids in paradise and growing up was still a world away.

I was 16 the last time we visited Atlantic City. It was our last vacation as a family. We wandered through the Boardwalk with nostalgia and sweet memories of those innocent days brimming in our hearts. But sadly, the Atlantic City of our childhood was now in decay, largely due to travelers preferring to fly to their vacation spots rather than stay close to home. This was just before 1976, when New Jersey voters would approve legalized gambling and Atlantic City would begin to experience a period of revitalization. The years have passed and I now live in California. I have not returned to see today’s Atlantic City and this has allowed me to keep my memories mostly intact.

Atlantic City of my youth. Maybe it wasn’t quite its heyday, but close enough. And now I can’t wait to see how “Boardwalk Empire” captures it all.