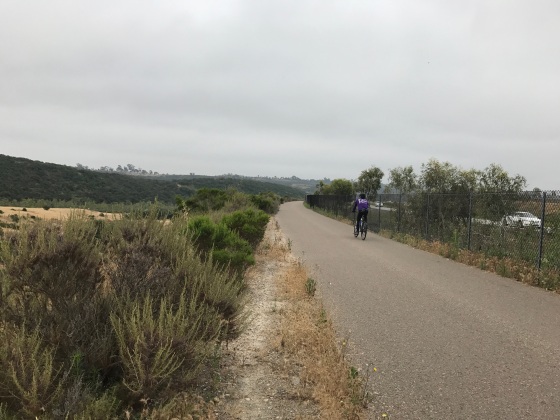 So, this weekend I went bike riding again. I found a trail near my house but turns out, it was a trail for hard-core bicyclists.  The kind that sneer as they pass you, with glances that seem to say, “Don’t get in my way, rookie!”

Yup, I was out of my league. Very much so. And it was daunting.

For starters, just about the entire time, it was all about the incline.  No downhills whatsoever! If you ask me, whomever said that what goes up must come down didn’t know about the steep terrain of this trail.

I have a 7-speed bike and, for the first time, I had to use each and every one of those speeds, mostly #1 and 2 which made pedaling uphill significantly easier.  Yet still, it was a struggle.

The entire time, I kept willing my orange cruiser to go up, up, up. And me?  I was panting like crazy.

My trusty bike seemed to be saying, “I shouldn’t be here. Why are we here, anyway??”

Face it, my beach-friendly bike clearly is not designed for so many hills. Nor am I, for that matter.

Looking around, I noticed that everyone on that road had mountain or road bikes. You know, the serious stuff. I was the only one with a happy-go-lucky cruiser. We were fish out of water, me and my creamsicle-colored bicycle.

My polka-dot bike helmet didn’t fare much better. It was put to shame by all the no-nonsense black and gray helmets others were wearing.  And please don’t get me started on my loosely fitting workout pants that I was wearing, which look nothing like the sleek, skin-tight shorts the real cyclists had on. Sheesh. I felt like an imposter who didn’t belong.

Every bike on the road passed me in record speed, leaving me in the dust, and also wondering whether slow and steady could ever really win the race. It was time to throw in the towel.

Defeated, demoralized, and embarrassed beyond belief, I was ready to call it quits.  Turn around and head back to my car. I could return home and binge watch something on TV, I was thinking.

Suddenly, I heard a male voice say, “Good job, you!”

Who said that? I turned to my right. No one there. I turned to my left. I saw a guy riding his bike alongside me.  I remembered seeing him a moment earlier when he had raced past me, but apparently he’d doubled back.

I looked back at him. He was pointing right at me and grinning. Then, just as suddenly as he had spoken to me, he remembered why he was here and sped off, soon becoming a dot on the horizon.

“Thank you!” I shouted, but my words scattered like confetti in the wind.  No matter. I was beaming.

“Good job, you,” he had said to me, despite my polka-dot helmet and orange bike.

Wow. Those three little words made were just the boost I needed.  For, instead of calling it quits, I decided to keep plowing ahead.  With my bike on first speed, and my legs pumping like crazy, I kept at it.

I rode my bike 10 miles that day and the entire time the words of that bicyclist ran through my head.

How wonderful was that?  Well I’ll tell you how wonderful. It made me want to go back next week and try going up that hill again. Maybe this time I’ll even go a little farther.

Three little words, that’s all it took. So impersonal, some might say, and yet, I cannot think of a more uplifting sentiment.