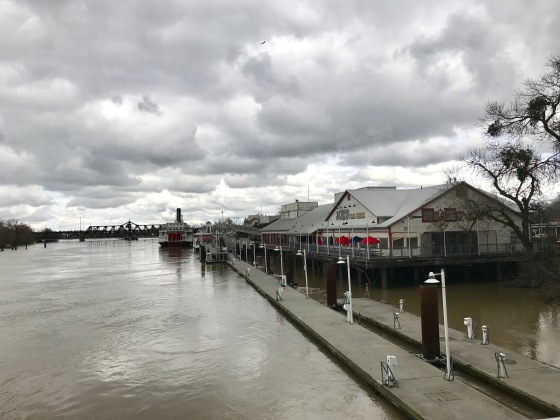 Open the door and see all the people.”

This weekend I visited my son in Sacramento, California.  He moved there about six months ago and I figured it was time I paid him a visit. Little did I know, however, that we’d have the entire city to ourselves.

Which naturally made me wonder, where is everybody?

Sacramento is the state capital of California.  Long ago, I used to travel there on business for meetings with the Department of Education. The meetings were generally scheduled on Fridays.  I would take a one-hour flight in and head back home on the same day.  As a result, I never had any reason to spend the weekend in Sacramento.

This city doesn’t know the meaning of traffic. At least not on the weekends.

I assumed that the absence of people could be attributed to it being a government-centric city, filled with legislators, policy-makers, lobbyists, attorneys and whatnot’s.  Folks who generally head back to their districts on weekends.  But my son tells me that weekday evenings are also devoid of people, so my theory was flimsy at best.

If you ask me, not seeing people out and about in any city is the most bizarre thing to experience. Unless, that is, you’re reenacting an episode of the “Twilight Zone.” You know the one where some hapless guy runs around an empty town looking for signs of life but can’t find any?  I kept expecting Rod Serling to pop out, with cigarette dangling from his lip, to explain the mystery behind the missing people of Sacramento. No such luck.

Once I got used to the weirdness of no people in sight anywhere (actually, I never did get used to it), I found the situation to be, well, a godsend. Think of it. No lines, no crowds when we went shopping. No waiting to be served at restaurants. No waiting to use the women’s room.  The city was ours for the taking!

Don’t get me wrong. Every once in a while, we’d run into another human, and when that happened it was like encountering an old friend.

I wanted to ask, “How did you end up here? How did you survive–and when do the zombies come out?”

I walked into a corner grocery store to buy a bottle of water.  My son and I were the only customers and you should’ve seen how excited the clerk was to see us. Wow, he seemed to be saying with his demeanor. People shopping!

He wasn’t even disappointed when all I bought was a water bottle. Though he did appear crestfallen when we left and I was pretty sure if I’d invited him to join us, he would’ve gladly obliged. It’s amazing how people will seek each other out, if only for companionship, in moments that feel a lot like an apocalypse.

I later said to my son, “You know, you could invite all the people we’ve run into today over to your tiny apartment and you’d still have plenty of room to invite more. We could have a potluck.”

For two days, we felt practically alone in this city, which was akin to being in a ghost town or a museum, where we were observers of a civilization that no longer exists and only the objects that defined it remain.

Even heading to the airport feels like solitary confinement.

A quick Google search led me to an article first published in 2013 about the Sacramento population, explaining that it’s been on the decline since its peak in the 1950s.

For years, the city had a shopping mall and I remember lunching there when I’d visit way back when. Today, it’s been shut down and gutted, with only the Macy’s department store still open. Reason? No one around to shop!

If I was on the city planning committee, assuming one exists, I’d immediately start building more residential housing and I’d take all the money in the city coffers and invest in the biggest, all-out marketing campaign to attract what the city needs most: people.

I’d also refurbish, make improvements to the Old Sacramento district. It’s supposed to be the city’s biggest tourist attraction, after all. Another option I’d consider is turning the state capital buildings into a modified version of Disneyland, replete with rides and all, but just open on the weekends. That should get families to come visit in record time.

Wake up and smell the coffee, Sacramento. If you care about revitalizing your city, you’ve got to start with more housing options, particularly for families. And add some retail, kid-friendly fun, nightclubs, museums, theater, concerts and Zumba classes for when yours truly pays another visit. Oh, and a whole lot more.  In other words, be part of this world and doing that starts with 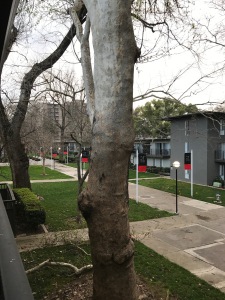 So, tell me. Is it me or are all state capitals like this?

14 thoughts on “Where is Everybody?”