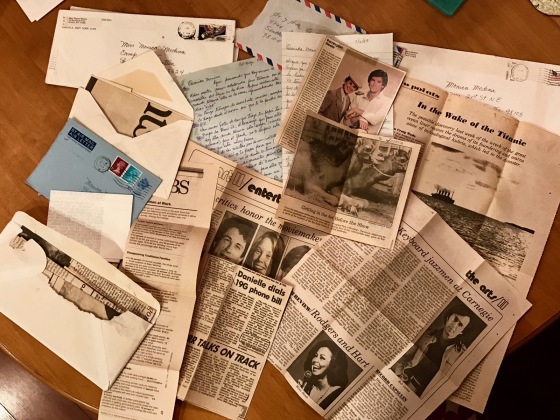 These are just a few of my mother’s clippings, now yellowed, that I keep in a box for safe keeping.

Mamá wasn’t a writer but she loved writing letters and she wrote lots of them. Growing up, it was a necessity because it was pretty much the only way to stay in touch with those who lived afar, as I did when I lived in Venezuela with relatives, or when I went away to camp and later, college. My mother’s letters were a lifeline to home, but especially they were a lifeline to her.

Sure we could make long distance calls, but they were expensive, sometimes costing as much as a week’s wages. Especially international calls. Besides, in Venezuela not everyone had a phone in their house.  When I was living in Santa Cecilia with my aunt, uncle and cousins, I remember having to run down the street to a neighbor’s house, where I could use the phone there to talk to Mamá who was home in New York. Those calls had to be planned in advance and generally I’d only get to talk to Mamá for three minutes, which doesn’t give you much time except to say, “I miss you, send me books to read in English!”

But though phone calls were few and far between, the letters came regularly. But I’m not here to tell you about Mamá’s letters. No. It’s what she included in her letters that I’ll always remember.

Each letter had a newspaper clipping tucked inside. Stories she’d cut out from Newsday, the Long Island daily.  I loved those clippings and looked forward to receiving them.  In college, I’d get a letter from Mamá every week. My school was isolated, practically in the middle of nowhere, so for me, my mother’s clippings kept me connected to the world.

I still have the clippings tucked into the original envelopes in which they were mailed. Going through them now, I wonder why she chose to send me these particular stories. Some I can guess why.

Like the one about a young woman whose credit card number was stolen and used to make $19,000 in phone calls. That would’ve been a cautionary tale for me. Or the one about “Remington Steele,” a TV series I was crazy about back then.

But the one about romance author Barbara Cartland? Or the one titled, “Re-evaluating a Relationship With Pips, the Cat?” I haven’t a clue. Perhaps these clippings reveal more about my mother than they do about me. Something to ponder.

It had been years since I thought of Mamá’s letters and her newspaper clippings. But then this week something arrived in the mail that made me remember.

My brother sent me a package and among the contents I found a letter that I’d once written to Mamá. It was in a beige envelope with a 15-cent postage on it, stamped Prince Georges, MD, Sep 16, 1978. Curiously, I opened the letter. It was four pages long. A letter to my mother, that was brimming with the excitement of a young woman who had just discovered the value of a newspaper.

I was in grad school at the time, preparing for my thesis and, while at the library one day, I  decided to read past issues of the New York Times. Can you believe it?  I went back to the period from April 10 to April 20, 1912.  Any idea what happened in 1912?

Well, the Titanic set sail that year, and I’m sure you know the rest.  For years, I had been fascinated with the story of the Titanic and had read many a book on the topic. Anything I could get my hands on.  But it had never occurred to me to read about it in a newspaper.

So, first I read the article about its departure from England, which read like a who’s who of the very wealthy of the day. The Astors, the Guggenheims and the co-owner of Macy’s Department Store, Isidor Straus, to name but a few.  I was riveted.

In pouring through the New York Times of 1912, I had a feeling of being there, reading the stories of the Titanic as they happened, with an immediacy that no history book could capture.  I was so happy, I had to share my joy with my mother, convinced she would appreciate how I felt. Here’s an excerpt, translated into English, of what I wrote her:

I don’t know if my mother ever responded to that letter, but when pouring through the clippings I found an article about the Titanic (see if you can spot it in the above photo). Perhaps she sent it to me after reading my letter. For the life of me, I can’t recall.

In any case, I’d like to think my letter might have given her some satisfaction. Hopefully, helping her see that my love of reading the newspaper really began with her.  With the clippings she’d send me, that now sit yellow and brittle in a box under my bed and close to my heart.

I’m still an avid reader of the newspaper. Only I read it online or on my iPad.  And instead of sending clippings to my children, I send them web links via email. (After all, nobody writes letters anymore)

In so doing, I like to think I am passing on to my children an appreciation of the newspaper, that Mamá passed on to me.

Funny how something so small can have such a profound effect on you. Even after all these years.