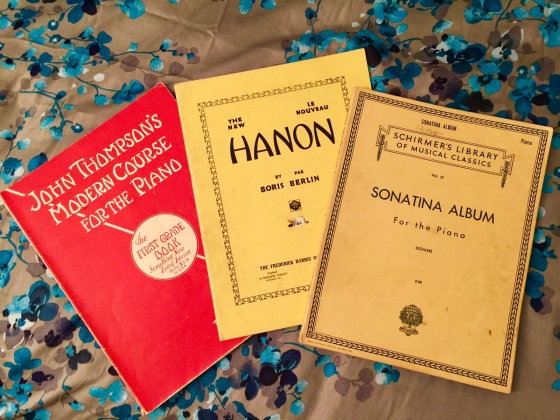 Some of my early music books. Everything I learned about playing the piano I learned from the John Thompson and Hanon series.

Ode to the piano!

My hat goes off to anyone who can play the the beautiful, illustrious, glorious piano. No matter your level of ability, know that you are carrying on a long tradition of enriching our quality of life with the lilting notes of an instrument steeped in history.

Of course, you should know that for years I myself played the piano. Quite adept at it, I might add. I swear I could hear my mother weeping whenever I played Chopsticks. “I paid for years of lessons for this?” Blissfully, I’d smile in agreement.

Playing the piano was my escape. Some say I could’ve been a contender.  A concert pianist slated one day to perform at Carnegie Hall!

Actually no one said that, but I wanted to believe.

The idea to first sign up for lessons came to me one day, while still in junior high.

“Monica, you should learn to play the piano,” a voice inside my head said. “The sooner the better. After all, at 14 you’re too old to be considered a child prodigy.”

I was determined to make it happen, no matter how expensive a new piano might be.  Briskly, I marched into the kitchen where my parents were, closed my eyes, and with some trepidation, proudly announced,

“I want a piano because I want to learn to play!”

I expected cheerful applause from my mother. A pat on the back from my father. “Bravo, Monica!”

But nothing. I looked around to see if they’d heard me.

My father was reading the newspaper, enjoying his afternoon demitasse of espresso, or “cafecito,” as he called it.  My mother was sorting her grocery coupons.  I repeated my statement. Still no response. Dejected, I retreated to my room. It seemed a piano was not in my future.

But a week or so later, I learned that my mother had checked the PennySaver for second-hand pianos and my father had put an offer on one. It was scheduled to arrive that very day.

And when it did, I was overwhelmed with emotion. A piano!  I had briefly envisioned a baby grand piano arriving. Something befitting a future concert pianist, even though I knew there was no room in the house for such a large, expensive instrument. 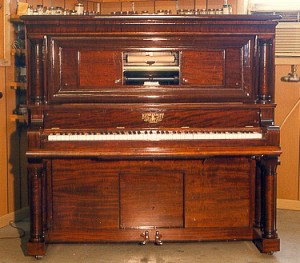 This player piano reminds me a lot of the one I once had.

But when the piano arrived it was an upright player piano, circa 1920-something. My father had plunked down $100 for this piano that no longer worked as a player piano but could still be used in the traditional sense. I was in heaven. A piano of my very own!

My mother found an instructor who lived close by.  A Filipino woman, Mrs. Ponce, who’d once been a professional pianist performing  regularly at the Waldorf Astoria, one of New York’s fanciest and poshest hotels.

I loved playing the piano. I even loved all the piano drills Mrs. Ponce taught me. In fact I still have some of my music books.

With time I mastered “Moonlight Sonata” by Beethoven. “Für Elise,” too.  I also played a selection of show tunes from a Rodgers and Hammerstein song book, and a simplified version of “Carmen” by Bizet.

So, when did it all stop for me?

When I went to college and no longer had access to a piano.  That was the day the music died. I moved on and filled my days with other things. I’d still play when I returned home for breaks but given time, even that stopped.

Ironically, when my daughter was in grade school, I decided to play the piano again. I was rusty, no longer remembering how to play the music I once so enjoyed performing, and more than anything wanted to relive the joy I felt in playing.

But when my daughter heard me talking about it, she begged for lessons, too. As I could only afford lessons for one,  I signed her up instead. That lasted two or three years before she quit. With the piano gathering dust, I donated it to the local Boys and Girls Club.

To this day, my favorite type of instrumental music features the piano.  When I listen, I can close my eyes and remember that there was a time when I too played the piano.

And  my level of playing may have been average, but to me it was divine.

Postscript: Today I contacted my daughter’s former piano teacher and told her that I was ready to sign up for lessons. She helped me select a good quality keyboard, as I no longer own a piano.  As soon as it arrives, I’ll be taking lessons again.  Because, after all these years, it seems you’re never too old to start over.  😉

14 thoughts on “My Player Piano”