Grr, Mom made me pose for this photo. Hank says I look like Little Lord Fauntleroy, whoever that is.

Nobody thinks I can write. Maybe it’s because I’m little. Hank calls me a pipsqueak, and I guess Hank should know. He’s my big bro and one day he’s going to be king of all of us. That’s what he tells me, anyway, and I believe him.

Hank’s got a long name for a dog. King Cavalier Spaniel or something like that. I’m just a Maltipoo and Hank says Maltipoos aren’t as special. That makes me sad.

By the way, Hank doesn’t like when I call him Hank. Says it’s not proper, but I don’t care. I’m not royal at all so I don’t have to follow his rules, only the house rules. That’s what Mama says. You probably know her as Cook.

Anyway, I can, too, write. I may be pint size, but I’ve got thoughts spinning in my head.  Like, I’m always wondering what’s at the top of the stairs or who’s that dog in the mirror that always barks back at me when I bark at him.

I wonder about that big thing in the living room that Mama likes to watch for hours on end. Every once in a while I see a strange dog on that screen, eating a gleaming bowl of dog food or prancing about with a human. Frankly, I don’t like it when I see a dog on the screen so I get up on my hind legs to make me look fierce and bark like crazy, which makes Hank bark, too. Mama says its nothing but a commercial. I say it’s nothing but trouble.

I like to play with my toys. I line them up upstairs, which is my favorite hangout place.  I then chomp on them until they squeak. The louder the better.

I can get a new toy anytime I want. I just look at Mama with my doe-like eyes and she’s putty in my paws. It’s that easy.  Yep, I can turn on the cute factor on a dime.

Sometimes, I jump on her lap so she can cuddle me. Not all the time, though, because that’s mushy stuff and I’m not big on mushy. But I like being petted. Feels good, ya know?

Other things I like:  Licking the walls, licking the carpet, licking blankets, and eating chicken. Yum!

This is me lining up my toys. It’s a chew fest!

I used to chew on the carpet and dug a few holes in them in the process. But I grew out of that habit and no one’s happier about that than Mom.

I love to bark. Which is why I bark every time a truck drives past our house or when the UPS man drops off a package. I even bark at kids on their way to school.

I like when Mom turns on the hose to water the plants. I run under the nozzle and love the feel of the water spraying on my face. It’s the best.

But I hate baths. Makes me tremble like a pathetic cat. Hate it, plus mom uses baby shampoo on me. It’s embarrassing. 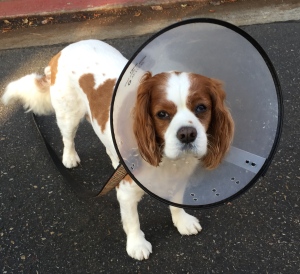 This is my favorite picture of Hank. Doesn’t he look silly?

Then there’s Hank. Sometimes I growl at him when he tries to eat my food or take my spot on the couch. Oh, who am I kidding? I growl at him everyday to protect what’s mine.

I like to chomp on his tail. It’s so big and fluffy. But for some reason, that makes him snippy. I ask you, what dog doesn’t like to play rough?

Tennis balls? Why, I don’t know where they are. Haven’t seen them!

One of these days, I’m going to get that tail.

Here’s something else you should know about me:  I don’t like to share. Especially when it comes to tennis balls. I mean, they’re the coolest thing on earth! If Mama brings two balls to the park, one for me and one for Hank, I steal both and hide them under my belly. But Hank figures it out and barks until Mama makes me give one of the balls to Hank. No fair!

So, you see? I told you I have lots of thoughts. What more would you like to know? Ask me anything. Just don’t expect me to wait around here much longer. I gotta run and catch me some tennis balls!