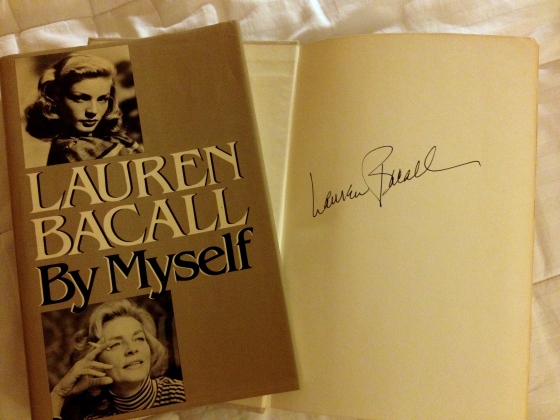 Many years ago, I stood in line just so I could meet Lauren Bacall and have her sign my copy of her then newly-released memoir. She was as breathtaking and captivating as she was on the Silver Screen. What a woman!

This year we lost some fine talent who will be greatly missed. Which is why I’ve gathered some of them here for one final exchange of ideas or, as I prefer to call it, a meeting of the “tangled” minds (Thanks, Steve Allen, for the idea!). So here they are, in their own words. First up, Lauren Bacall.

MTW (Monica’s Tangled Web): Hi Betty! Okay if I call you by your real name?

MTW: Actually, I can’t whistle to save my life–or yours, for that matter–but I do get your point. I won’t call you Betty, you don’t call me Steve, and nobody whistles. Agreed? Now tell me, what it’s like being a legend?

Bacall: No, I don’t like legend. I mean, I don’t like the category. And to begin with, to me, a legend is something that is not on the earth—that is dead.

MTW: Ahem, Miss Bacall, I’m normally not one to address the elephant in the room, but by your own definition, well, you are, shall we say, deceased? Boy, this is awkward. Let’s change the subject, shall we? Let’s see what James Garner has to say about his nice-guy reputation.

Garner:   I’ve had to work hard at that easy-going manner you see on screen.

MTW: Really? Because you do it with such ease and certainly had me fooled. Wouldn’t you agree, Miss Bacall?

Bacall: He felt that Lauren Bacall was better sounding than Betty Bacall. He had a vision of his own. He was a Svengali. He wanted to mold me. He wanted to control me! And he did until Mr. Bogart got involved.

MTW: Enough with the names already, Miss Bacall! We get it. You don’t want to be called Betty, but I don’t think Mr. Garner is trying to mold you. Right, Mr. Garner?

Garner: I called the chief and asked if I need to be concerned about this.

MTW: The chief? Not sure who you’re referring to, but you certainly don’t need to be concerned about Miss Bacall obsession with her name. Heaven’s no! Now, let’s see if Maya Angelou has anything to say about all this brouhaha. Here she comes now.

Angelou: What you’re supposed to do when you don’t like a thing is change it. If you can’t change it, change the way you think about it. Don’t complain.

MTW: My point exactly. Miss Angelou, yet Betty, ahem, Miss Bacall keeps beating a dead horse with the name thing. In fact, let’s agree not to bring up any names again. Maybe Joan Rivers can help lighten the mood by sharing with us her secret to looking so fabulous.

Rivers: I’ve had so much plastic surgery, when I die they will donate my body to Tupperware.

Márquez: The only regret I have in dying is if it is not for love.

MTW: Really, that’s your only regret? If that’s the case, then that 100 years of solitude must’ve done a number on you.

MTW: Spoken like a true romantic, Mr. Márquez! Moving on, the following is a question for Harold Ramis. “Ghostbusters” was probably one of your biggest hits. You got to work with one of my favorite actors, Bill Murray, and frankly I found the movie funny, clever and ingenius. Which has me wondering, now that you’re on the other side, who are you looking forward to working with there?

Ramis: I had a lot of fun working with John Candy. We had a pretty good rapport.

MTW: Oh, so you think you’d work with him? Well, what kind of film would the two of you make?

Ramis: There’s a personal story of my own that I will write at some point, and it’s a film that I will happily make. It could very well be the next thing I do, unless someone shows me something great.

MTW: Like who–Gilda Radner or Jan Hook? Two very funny ladies in your neck of the woods. And speaking of Jan, her ears must’ve been itching, for here she is now, looking rather discombobulated, I’m afraid.

Hooks: There’s no basement at the Alamo!

MTW: No worries, Miss Hook. I don’t think Mr. Ramis will be doing any shooting at the Alamo, anyway. I’m sure the backdrop will be, ahem, more celestial in nature. Perhaps we can get Robin Williams to weigh in and tell us what it is like?

Williams: If heaven exists, to know that there’s laughter, that would be a great thing.

MTW: What do you mean, if? Shouldn’t you know by now? I mean, how do you plan on keeping folks up there entertained with your madcap humor?

Williams: You’re only given one little spark of madness. You musn’t lose it.

MTW: No doubt you’ve always had that spark. Pure genius, if you ask me. Speaking of great comedy, I wonder if Mike Nichols has any plans for his after life.

Nichols: Cheer up. Life isn’t everything. It always stands me in good stead.

MTW: You mean, stood you in good stead, don’t you, Mr. Nichols?

Well, we’ve talked long enough. Miss Angelou, will you share some sage advice and parting words, for those of us still among the living?

Angelou: My mission in life (was) not merely to survive, but to thrive; and to do so with some passion, some compassion, some humor, and some style.

MTW: Your words are something we can all take to heart. Miss Bacall, did you want to add anything?

Bacall:  My son tells me, “Do you realize you are the last one? The last person who was an eyewitness to the golden age?” Young people, even in Hollywood, ask me, “Were you really married to Humphrey Bogart?”  I don’t live in the past, although your past is so much a part of what you are that you can’t ignore it. But I don’t look at scrapbooks. I could show you some, but I’d have to climb ladders, and I can’t climb.

MTW: That’s alright. No need to climb any ladders today. I think we have time for one more thought?

MTW: Beautifully said! Thank you all for filling our lives with joy, laughter, reflection and your invaluable wisdom. The world can’t thank you enough for inspiring us in so many ways. I’m so glad you could join us one last time! See you on the other side–but not anytime soon, so don’t hold your breath!

And thank you to all my readers for making 2014 such a fabulous year for me and my blog. In honor of 2014 coming to a close, and all the amazing people we had to say goodbye to this year, I leave you with this heartfelt song by Randy Newman.

25 thoughts on “A Conversation with Some Late Greats of 2014”