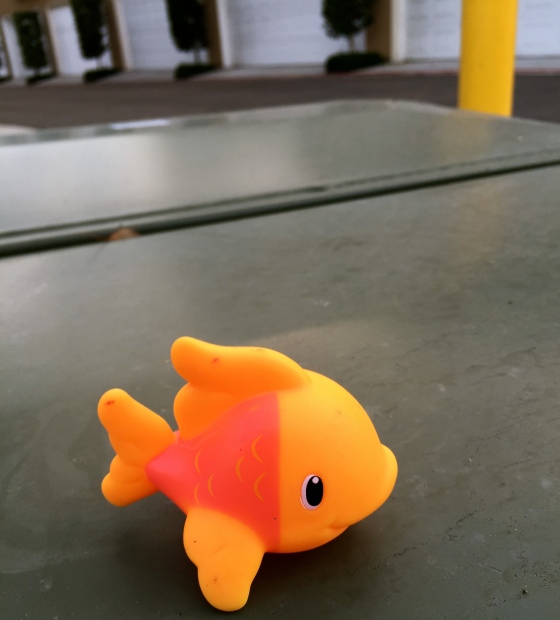 Sure he’s missing his stripes, but he’s none the worse for wear! And what’s he doing two miles from the sea, here in San Diego, I do not know. Nor do I ask, as it’s none of my business.  All the same,

Of course, you might be thinking, “I thought he was already found and reunited with his dad, in the film, ‘Finding Nemo.'”

Well, I thought so, too. But there you are. Go figure. He was lost and I found him, and I can say without any doubt or hesitation, it was meant to be.  For, I am an expert at finding things, especially those lost by others and not by me.

Indeed, I have had little success finding things that I’ve lost. In fact, I’m still missing my ruby red watch that I purchased in Switzerland nearly a decade ago, so if you find it, you know where to find me.  I’m with Nemo. 😉

Lucky me, I found Nemo, and now, it goes without saying, the world is a better place for it.  He looks so happy, doesn’t he?  That’s because he’s been located, sitting atop a whosie-whatsit in the middle of nowhere, better known as my neighborhood. There are worse places to end up, you know. This is not one of them.

So now that I found him, there is one thing I need to know:

Is there a reward for finding Nemo?

Thank you to all of you who keep reading my posts. Posting everyday is a blessing and a curse but I appreciate you being here all the same!

Now, have at it:  Comment away! There’s a prize you know!