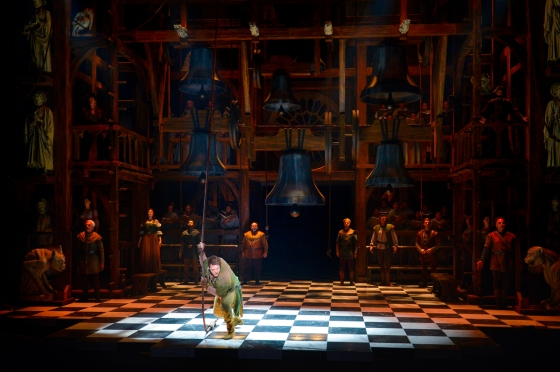 Michael Arden (center) as Quasimodo is excellent, capturing the nuances of this outcast hero. Here he is with some of the cast of La Jolla Playhouse’s U.S. premiere production. All photos by Kevin Berne, courtesy of the La Jolla Playhouse.

Guess who was spotted at the La Jolla Playhouse for the opening night performance of the new, exhilarating, out-of-this-world musical, “The Hunchback of Notre Dame”–the one I predict to be bound for Broadway??

Why, yours truly, of course!

It’s not everyday I get to go to the opening night of anything. In fact, the 12th of Never was probably the last time this happened.

But ooh, la la, what fun it was! Adapted from the Disney animated film of “Hunchback,” but staying truer to the Victor Hugo story, the play featured the songs from the original film and added new ones from Alan Menken, composer (who also wrote music for Disney’s “The Little Mermaid), and Stephen Schwartz, lyricist.

All in all, a much darker, more brooding production than the Disney film ,and the fact that Disney approved these changes is a testament to their willingness to push the envelope. For, the stirring music–which included some show-stopping tunes–the costumes, the dialogue–and the acting–all worked cohesively, creating a musical infused with vitality and emotion, reminiscent of the ever popular musical, “Le Miserable.”

Even the magnificent set design captured the rafters of Notre Dame, complete with bells and singing “gargoyles.”

In my “Ace Reporter” role, earlier this fall, I was able to interview Michael Arden, the star of the show. Playing the role of Quasimodo has been a dream come true for Arden, who just directed “Spring Awakenings” for the deaf community in Los Angeles. You can read more of my interview with Arden by clicking here.

I give it two thumbs up! Not to be missed!!  Performances run through December 14th at the La Jolla Playhouse. After that, the show moves to the Paper Mill Playhouse in Millburn, New Jersey. After that, dare I say it–Broadway? 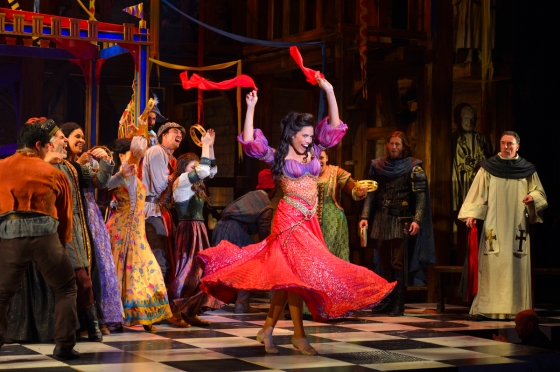 Ciara Renee (center) is striking and spot on as Esmeralda.

EXCITING NEWS! I’ve decided to see a psychic so maybe so maybe I can find out why I committed myself to such a highfalutin challenge!

And whether or not I succeed, I’m awarding a prize to the one person who has commented on the most posts this month. If there’s a tie, I’ll do a drawing.  So if you want to win, make sure to leave a comment!

So, will I make it to the end of the month or will I crack under the pressure? Stay tuned to find out!