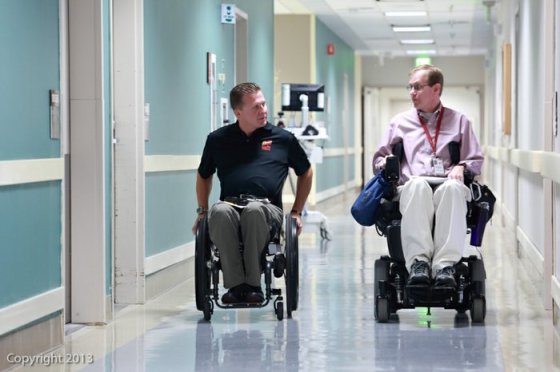 Kovach, left, with a Paralyzed Veterans of America colleague.

In honor of Veterans Day, I want to recognize some veterans I’ve had the privilege of interviewing in the past year or so. Honored as Local Heroes, these are men who served in the Marines, the Navy and the Army. They fought with valor and dignity.

First up, the Montford Point Marines, who embody true heroism.  World War II was the first time African Americans were permitted to enlist in the military and fight for their country. The Marines I interviewed were among the first African American men to take part, but in the process of doing so, they faced racism, prejudice and overall, poor treatment.

As Retired Gunnery Sergeant J.T. Inge, the grandson of slaves, explains, “Slavery produced a by-product that stigmatized blacks. Blacks were considered to have strong backs and weak minds. We couldn’t think. We needed to be told everything that needed to be done. There was a resentment that this was an elite society preserved for whites only and that’s what happened in the Marine Corps. From 1775, when the Marine Corps was organized, it was an all-white, elite fighting unit, and there was a resentment from people who felt you were invading their territory.”

Next is Al Kovach, Jr., a former Navy SEAL who is now a quadriplegic. He’s also the current president of the Paralyzed Veterans of America.

“I volunteered to serve my country in a camouflage uniform,” he explains. “Once I got paralyzed, my uniform changed. I’m wearing a suit and I’m in a wheelchair but I’m still serving my country by taking care of my veterans. So it’s rewarding to see people that were once in the military, but are now wearing suits and in wheelchairs, still in that mindset of serving their country. Like me, they’re now doing it in a different way.”

Finally, Sy Brenner, who served in he 410th Infantry regiment of the 103rd Division, and who still has vivid memories of the night he was taken prisoner by the Nazis and the fear he had that the Nazis would discover his Jewish identity. The experience of being in a prison camp for nine months led to his PTSD (Post Traumatic Stress Disorder), which he wouldn’t discover he had until 40 years after the war ended. Brenner survived imprisonment without food or water, by eating snow. He is a recipient of a Purple Heart, a Bronze Star and a Combat Medic Medal.

“When I returned from war, they called it ‘Battle Fatigue,’” he says of his PTSD. “And the first order that I had was not to talk about it. You were given orders that you cannot even tell your family what you did when you were a prisoner. I found out from the other men that they had signed papers that they wouldn’t talk about it, which was the worst thing they could’ve done because we all kept it bottled up inside of us all those years”

I encourage you to click on the links on their names and read their stories. You’ll see how their courage and fortitude make them Local Heroes on this day and everyday.  To all veterans everywhere, thank you for your service.

Thank you for reading! Don’t forget to comment for your chance to win an Amazon gift card. It’s not much, only $20, but it’s my way of showing you how thankful I am to receive your comments/encouragement as I strive to meet the NaBoPoMo challenge. Besides, it’s the thought that counts. Speaking of counting, leaving multiple comments in one post doesn’t count, or rather, counts as one entry. Get it? One entry per post!

24 thoughts on “A Day for Remembering Our Veterans”