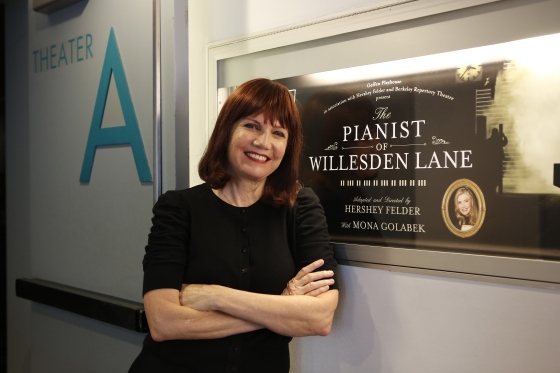 When was the last time you went to the theater?

Not the movies or Netflix, but real, honest-to-goodness theater. Where the actors are live, and do the show night after night but never seem to lose their excitement for the performance, and where you find yourself suspending disbelief and succumbing to the drama unfolding before your very eyes. When did you last go?

Well, there’s something to be said for the small, intimate theater experience. In particular, the Lyceum Theater located in downtown San Diego, where guests can mingle and view art before the performance begins, and where sometimes you get to meet the performers afterwards and ask them questions about the play you’ve just seen.

This weekend, I went to the Lyceum and saw “The Pianist of Willesden Lane.” It’s the kind of play that slowly draws you in, exquisitely conjuring up the elegance and artistry of Vienna on the brink of World War II, as well as the heartache and loss of war. I soon found myself riveted by world-renown pianist Mona Golabek and her one-woman show.

The tale unfolds like a beautifully-wrapped confection, intermingled with the music of Grieg, Chopin, Beethoven, Debussy, Rachmaninoff and other classical composers. Compelling, poignant and masterfully told, Golabek didn’t disappoint. She is magnificent in her ability to captivate an audience through anecdotes about her mother, and music that touches the soul. It is as if the spirits of these classic composers swirl about her, helping her to bring their musical pieces—and the story—alive.

Mona Gobalek channels her mother in “The Pianist of Willesden Lane.”

“The Pianist of Willesden Lane” is based on the wartime memories of Lisa Jura, Golabek’s mother, and adapted from “The Children of Willesden Lane,” a book Golabek co-authored with Lee Cohen. It is a tribute to her mother, an accomplished pianist whose love for the instrument helped her make it through a time of great hardship.

Entrancing and heartfelt, I felt as though I could see Lisa herself, who at 14, had to make her way on the Kindertransport, a rescue effort in which 10,000 Jewish refugee children were sent to Great Britain. Jura must have been scared to find herself in a new country around strange people, where everything was unfamiliar, but she found solace in the piano, with its power to bring people together around a common love of music. Indeed, music can be such a uniting force.

The seeds for the play and book began early in Golabek’s childhood. She and her sister would receive piano lessons from Jura, who would sprinkle those lessons with stories of her own youth. Jura survived the war, including the London Blitz, by holding on to her music and to her dreams of being reunited one day with her family, and of becoming a concert pianist.

“My mother had enormous loss,” Golabek explains in a Q&A following the performance. “She told me her stories when she put me to bed at night and in the piano lessons. She pierced my heart, and branded it through this. I think all of us, who are children of survivors, we bore the weight of our parents, and we wanted to take away their pain. My sister and I wanted to make them proud and carry on that story.”

Golabek, who spent two years collaborating with Director Hershey Felder, to adapt the book and turn it into a play, has already brought her show to audiences in Chicago, New York and San Francisco. Later this fall, she will perform it in Los Angeles, in front of 10,000 high school students.

“It’s not just my mother’s story,” she notes. “I truly believe I’m just a conduit, bringing people together through this story that everyone can relate to, including today’s young people who may be going through the challenges of coming to a new country, of not knowing the language, of being children of a single parent, or maybe, no parents…These legacy stories, of overcoming adversity and people helping each other, have to be told and they can’t be lost.”

Golabek describes the most moving moment in the play for her.

“It’s when I say, ‘When the battle was over, on the beaches of Normandy, thousands had given their lives for our freedom.’ Today, so many people take this for granted. Young people don’t really understand the sacrifice, and how we can walk in freedom because of these incredibly brave men who gave their lives. There were many people who helped my mother and I’m alive today because of them. So, this is a story of gratitude, and what you hold on to in the darkest of times.”

As the Q&A draws to a close, Golabek, whose parents and sister have all passed away, reveals to us something she quietly does toward the end of each performance, just before she plays the last piece on the piano.

“There are three lights aimed at the stage, directly above me,” she points out, trying to hold back tears. “I look up at them for a moment because I think maybe that’s my mother, my father and my sister looking down on me.”

In the play’s program guide, there is a personal message from Golabek.

She writes, (My mother’s lessons) “were more than piano lessons–they were lessons in life. Sitting at the piano as a child, I would close my eyes and listen to her lilting voice and imagine her world.”

Well, for the 90-minute performance I, too, was able to imagine Lisa Jura’s world.

The San Diego Rep’s performance of “The Pianist of Willesden Lane,” runs at the Lyceum through October 12.  If it comes to your town, be sure to go see it. It’s well worth it!