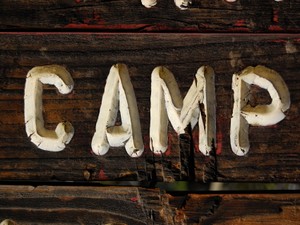 Confused and groggy, I opened one eye. My head felt as if it’d been pummeled, side-swiped, and smashed against one of those large rocks down by the lake. Yep, as if eight weeks at Camp Prison Shit hadn’t been enough, I was pretty sure I’d now officially been through the ringer.

“Of course you are. You have Mononucleosis. Do you hear me? Mono.”

I stared at the woman addressing me. Mrs. Tupelo, the camp director. She was peering into my face. Her white skin was tight around the corners of her mouth as she enunciated each syllable in a raised voice, like I was hard of hearing or something. Her orange red Revlon-coated lips pressed back against her gums, exposing her glossy, Chicklet teeth that seemed ready to take a bite out of a watermelon.

I was laying in a bed, a real bed, not the standard-issued cot we had in our cabins. I had just awoken, a miserable, snotty wretch. What I’d give to be anywhere else. Back at school even. Away from all this crap. Yet here I was, still at Camp Prison-Shit. How long had I been out, I did not know.

“What am I doing here?” Why was I still at camp, I wanted to know.

“Jon found you in the woods during the storm three nights ago. When he brought you in, you were in a coma-like state. Delirious at times and with a high fever. I shudder to think what you were doing in the woods during that downpour, but can only assume you were already not feeling well and on your way here, to the infirmary. Lucky thing Lucas had run off and Jon went searching for him. Otherwise, in that storm, who knows when we would’ve found you.”

That’s not exactly how it happened, but I had to hand it to Jon. He was able to save both our necks in one fell swoop of a story.

Mrs. Tupelo sat down on my bed and placed a hand on my forehead.

I stared at her, unable to react as I tried to take in what she’d just said. I’m being released? She must’ve thought my lack of reaction somehow meant disappointment.

“Well, there’s no way I can allow you to rejoin your troop. You’re contagious and you need your rest. So don’t even try to change my mind. Your parents are picking you up tomorrow and that’s that. But don’t worry. We still plan to pay you for your wages through the end of camp which is still three weeks away.”

Leaving tomorrow was music to my ears. No more Camp Prison Shit, and all because I have Mono? How lucky can one girl get?

I yawned and feigned exhaustion so Mrs. Tupelo would leave, but as it turns out, I dozed off. A little while later, I awoke to something warm and furry nuzzling my hand. Lucas! I was thrilled to see him, the most loving German Shepherd I’d ever known.  I was sure going to miss him.

“Lucas,” I whispered in his ear. “Did you hear? I’m going home tomorrow. I’m gonna miss you, buddy.” And Jon, too, I thought to myself.

Jon. I wondered about Jon, whether I’d see him again. I figured being a guy he wouldn’t be allowed into this part of the camp. So, chances of running into him before I left were next to nil.

Absentmindedly, I scratched Lucas around the ears and along the back of his neck. There’d be no more hanging out with Jon and Lucas on the farm. Maybe one day, I’d get a German Shepherd of my own and call him Lucas. My very own Lucas.

I scratched Lucas some more, and I could see he liked it. I touched the red kerchief around his neck. My German Shepherd would have a red one, too. Just like Lucas.

Just then, I caught a glint of something white tucked in Lucas’ kerchief. Running my fingers along the knot I found it was a piece of paper. I pulled it out, and unfolded it. A letter from Jon!

It was Denise and trailing behind her, Yolanda. I stashed the letter under my pillow.

Denise looked over my sickly state of being and said, “Shit girl, if you wanted out of our troop that bad, all you had to do was say so.”

“Don’t you worry about those ingrates. They’re stuffing themselves at dinner while some other counselors are making sure they don’t steal anything from the mess hall like knives, extra ice cream or something.”

“Mira mi’ja,” interjected Yolanda, “we stopped by the cabin and brought you your things, so you don’t have to get ’em later. Besides we don’t want your Mono stinking up the cabin, if you knows what I mean.”

The girls made you a get-well card.” Denise handed me a red sheet of construction paper, with all of the girls names scrawled on it. I looked at the card. Some had drawn flowers and smiley faces next to their names, while others scrawled their names with the handwriting of a serial killer.

“Not so pretty, really,” smirked Yolanda. “We told them they had to make the card or no coffee for them in the morning. You know how they get without their cafecito. Nasty.”

I nodded. Still, it was kind of nice they made me a card. Maybe there was hope after all.

“We’ll mi’ja, we better get back to the little maniacs before they set fire to the woods and shit,” said Yolanda. “I’ve had it hasta aqui with them. You lucky stiff for getting to go home with Mono.”

“Yeah, me and Mono are going to have fun together,” I responded, adding, “But I’ll be sure to stay in touch.”

“No you won’t, Mentirosa, so don’t even pretend,” scoffed Yolanda. “You’ll forget about us and all this shit soon as you’re out.”

Lucas laid his head on my bed. I gently stroked it and said to my co-counselors, “Okay, if you say so. Thank you for bringing my stuff. Maybe we’ll see each other back in the city, meet up at a disco or something.”

“Sure thing,” Denise said. “Hey, you’re gonna come back next summer, aren’t you? Mrs. Tupelo said she wants the three of us to come back and work together. Apparently we were damn good with the six and seven-year old’s. Go figure.”

“If she only knew,” remarked Yolanda.

Come back to Camp Prison-Shit? Not in a million years. I shook my head.

“I make it a policy to never go back.” It was a rule I adopted on the spot.

“Think about it. Maybe you’ll change your mind.”

Fat chance. Denise and Yolanda headed for the door.

“Oh and Denise?” I called out.

“Yeah?” She turned and looked at me expectantly, with one hand on the door knob.

“Yeah, yeah. I’ll mail it to you,” she laughed. And then they were gone. Neither of them had my address.

Alone in my room, just me and Lucas, I grabbed the letter.

“I’m sorry our last night together ended up being such a dud,” the letter began. “Heard it’s Mono. Maybe I’ll get it too, considering I haven’t been feeling well since yesterday.

“Anyway, I just want you to know, I enjoyed our summer together. Hope you did too. Lucas is going to miss you, but he’s hoping, and I guess so am I, that you’ll come back next summer. It sure won’t be the same without you. Good luck in school and feel free to write me anytime. Always, Jon”

I folded the letter and gently placed it in my bag. I then pulled Lucas, who’d been curled up on the bed, close to me. I was going to miss Jon, for sure. But most of all I would miss Lucas. For a few weeks one miserable summer at Camp Prison-Shit, he’d become my loyal companion. Lucas with the red scarf.

I put the letter in a zippered compartment of my bag and snapped the bag shut, forever closing another chapter of my life.