You may have noticed that it’s been eons since I last posted in my Lightning in a Jar series. That I suddenly stopped and left the story in limbo. My story. As with most things, there’s a reason for that. I wasn’t ready. It’s scary to put yourself out there. To reveal secrets about yourself that have been hidden for so long and feel like they happened to someone else. Was this really me? Did I really do this? Why? The mind of my young self will always be a curious puzzlement to my older and, hopefully, wiser self. I cannot explain decisions made then, any more than I can explain why the sky is blue or why the chicken crossed the road. That young self should have been happier. She had much going for her, I know that now. Yet she couldn’t see that and lived in a state of fear. Fear of the unknown, mostly. Fear of not being able to handle it.

So now, my friends, bear with me. Take one more trip into the past and please don’t judge this girl too harshly. She’s only human, after all.

There but for the grace of God.

Teenagers are not known for making wise choices that take into account their best interests or that of others. If that were the case, they wouldn’t binge drink, have unprotected sex, go drag racing, skip out on class or smoke. They’d be more inclined to study hard, eat balanced, nutritious meals, stay drug-free, and get a full night’s sleep. 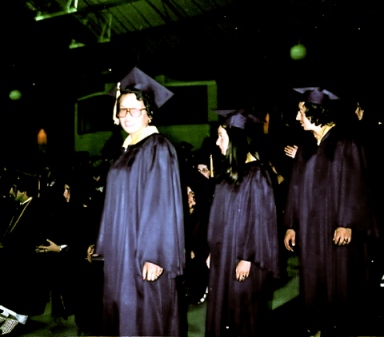 But, we know better. Many times, the selections made are based on impulse, peer pressure, trends or sheer desperation. You can categorize me in the latter, for in my senior year of high school, it was sheer desperation that propelled me to make a choice that nearly cost me my life.

There but for the grace of God go I.

This is what transpired during my senior year:

1. I joined the “Free School,” a new, independent study program developed at my school, where you could pretty much study what you wanted on your own terms, providing it was approved by an assigned teacher. (Don’t forget, this was the 70s.)  I used the time to write a play, a really awful one at that, set in a USO Canteen during World War II.

2. My brother, who was attending a  prestigious university in Massachusetts, phoned me, urging me to apply to a school in the vicinity of his. It, too, was considered a good school and I wondered whether I had the chops for it, considering it hadn’t been on my guidance counselor’s list of schools for me.  But my brother egged me on, and so I went ahead and applied, making a mental note not to inform my guidance counselor about it.

3. I became obsessed with writing poetry. I practically wrote a tome of poems everyday. Profusely, deliberately, each one darker than the next. Macabre words poured from my aching heart as I became increasingly depressed about the present and the future, which I knew from Doris Day, was not mine to see.

Then, with graduation just three months away, I reached my breaking point on a night that included a litany of mistakes, miscommunication and crushing disappointment. Truthfully, I remember little of the night. I suspect I’ve blocked out most of it in order to protect myself.

I have only a handful of memories. A group of friends gathered. Feelings were hurt. I was distraught. Words were exchanged, some with regret. Tempers flared and friendships were severed. Someone was blamed, justly or unjustly, and when it was over, when I was alone, I was terrified and at a loss. Feeling hopeless, I tried to end my life.

More than that, I cannot tell you. After all, some things are better left unsaid.

Obviously though, I wasn’t successful. I remember waking, dazed and in a dense fog, in the mental ward of Bellevue Hospital in New York. I’d taken a whole bottle of prescription pills and my stomach had to be pumped many times over. Feeling empty and defeated, frankly, I was startled to be alive.

They say suicide is painless. But it isn’t. I caused a lot of agony to myself and to those around me, particularly my mother.

I was forced to see a psychiatrist, a man who, right off the bat, I didn’t trust. Each session, I’d arrive and we’d have a staring fest. He wanted me to talk and I wanted him to ask me questions that would get the conversation going. Anything–what was I thinking, what did I eat for breakfast. But he didn’t. He sat stoically behind his desk while I remained numbly quiet, waiting for the hour to end.

My school was located next to a Catholic church. One day, still feeling moody, desperate and unloved, I felt compelled to walk out of school and head toward the church. I wasn’t sure why I was going as I hadn’t been inside in ages. Nobody tried to stop me from leaving school. Nobody seemed to notice as I made my way purposefully, as if in a trance, through the thicket of trees and underbrush to the other side where the church stood in a clearing.

With sudden trepidation, I walked up the steps to the front entrance and into the sanctuary. There was no mass in progress that afternoon, but there were a few people kneeling in prayer. As a child, I’d been to many masses there. I was familiar with the scent of the church, the feel of the pews.

A sense of warmth and comfort overtook me in the flickering shadows reflected by the stained glass light. I could feel my knees quiver as I took a seat in a row directly behind a middle-aged woman wearing a purple scarf tied around her head. I did not know her but I somehow I needed to feel connected to someone.  Anyone. In my emotional state, sitting behind her seemed the logical thing to do.

The woman turned around and asked me what was wrong, but I was too choked to respond. So, she handed me a kerchief, and said,

“Maybe you should talk to Father Francis. Let’s go see if he’s available, shall we?”

I nodded as I let her lead me by the hand, down the stairs to the administrative offices, where we found the priest. She placed my hand in his and that simple gesture proved to be my salvation. For Father Francis spoke to me in a way no adult had ever before. Sincerely, and with genuine trust. We bonded over a love of poetry. Turns out he was a published poet.

Father Francis spoke to my school, my parents and the psychiatrist, which cleared the way for me being allowed to leave school whenever I wanted to meet with him. We’d read our poetry aloud to each other, share our feelings, and chat about anything else on our minds. I looked forward to these visits, and with each one, I began to feel a little bit better.

The college letters started to arrive. I got into all the schools my guidance counselor had told me to apply to. I also got into the school my brother had urged me to apply to–complete with a package deal of part scholarship, part loan. Father Francis whooped like a cowboy when I told him the news. That I’d be going to Massachusetts in the fall.

As for my guidance counselor, her jaw dropped and her face turned ashen when I told her what school I’d be attending.  She seemed confounded to think that I could get into such a good university.

Father Francis changed my life. He helped me look ahead to my future with promise and hope. He helped me draw from my own strength and see that I was already more independent than I ever realized. And, through his candor and sincerity, he gently guided me to the next passage of my life: my adulthood. At one of our last visits, Father Francis gave me a small book of his poetry. Inside he’d written,

“For Monica, Whatever you do, wherever you go, I have faith in you. Lovingly, Father Francis.”

For graduation, my mother sewed for me a red halter dress with white polka dots and white trim. I loved that dress. It felt good to wear. Graduation day arrived and I was ready. Ready to start anew, away from high school memories. I needed to say goodbye and turn my back on all of it. But then I thought of James, whose love had been so real and felt so good. I thought about all the guilt I’d carried in knowing he was younger than me.

Ah, the whims and whimsy of youth. How trivial it can all seem in retrospect. But, I shook my head sadly, knowing that moving forward meant needing to wipe the slate clean. I’d have to say goodbye to James, too.

I had lots to look forward to, including spending the summer with family in Venezuela. And in the fall, I’d be heading to Massachusetts.

Next Chapter: The Epilogue

Missed an installment? Catch up by visiting the page, Lightning in a Jar: High School Years.

37 thoughts on “Lightning in a Jar: The Grace of God”