I never dress up for Halloween. After all, the very idea makes me cringe. 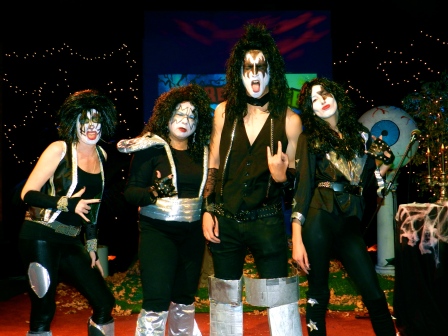 Not since my childhood days when every costume came in a box with a cellophane lid so you could see the mask and decide if that was the costume for you. And I’m pretty sure, no matter what costume you chose–cowboy, witch, princess or maniacal clown–it was made of some cheesy, flammable cloth that came in only size and was guaranteed to make you look like something the cat ate.

For years, I wore the same Snow White costume with the kind of mask that totally blocks your vision. I’d go out trick or treating, but thanks to the mask, I couldn’t see two feet in front of me. For all I knew, I was walking around in circles, hitting up the same three houses for candy. No wonder I ended up with so many of those stinky Mary Jane’s. Did anyone really eat those things anyway?

In college, I threw a Halloween party with my then boyfriend. We decided to dress as Mickey and Minnie. No boxed costumes this time. We made our own, using clothing we already owned. Suffice it to say, we looked pitiful. Like Minnie and Minnie had fallen on hard times. No one could guess who we were supposed to be, and the experience traumatized me so much that I never wore another costume again.

For as long as I can remember, my workplace has been throwing an annual Halloween party. A lot of people dress up and are very creative, coming up with all sorts of ingenious costumes. In fact, we hold a costume contest and each year the competition seems to get tougher.

I usually dread this party. Mostly because when it comes to costumes, I’m all thumbs.

For starters, I can’t sew, not so much as a button or a hem. Besides, I don’t have one iota of creativity when it comes to conjuring up a clever costume. Which is why, long ago I gave up on the notion of costumes.

But this year, Ashley and Clare, whom I’ve written about before, announced it was time our department got in the groove. They begged, cajoled, needled and did everything possible to get me on board for a group costume. Little did they know the full extent of my costume phobia, but somehow I agreed, with the following conditions: 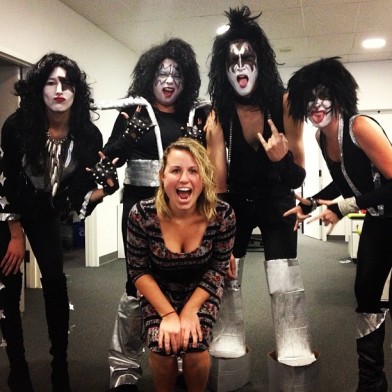 Hayley couldn’t join us, but she helped us get into Kiss mode.

1. They’d need to come up with the idea for the costume and tell me exactly what I’d need to provide.

2. Any sewing or application of special makeup would not be done by me. Sewing brings up too many nightmares of home-ec class, after all.

It was decided we’d go as Kiss, everyone’s favorite mime, I mean, rock band. Sean, our newest staff member, rounded out our group, and Hayley, who couldn’t make the staff party, cheered us on and helped us get ready.

For nearly two weeks, Clare and Ashley searched high and low for the necessary accoutrements for the costumes, visiting thrift shops, swap meets, fabric stores, and when all else failed, by going online. Clare, who is the queen of crafts, knows her way around a sewing machine. She took measurements and made the clothing essentials that helped complete our look.

On Halloween day we commandeered one of the conference rooms in order to get ready. Which mostly meant applying our makeup, and putting on our wigs and costumes.

We had to do this all in secrecy so as not to give away our group costume ahead of time. But you can only hide so much when you’re at the office, and as soon as we walked out of the conference room, we were bombarded by the, ahem, “paparazzi,” better known as our fellow colleagues, who were rather thunderstruck to see me in costume. Needless to say, it was rather fun posing in rock star mode.

The real Kiss. Can you tell the difference?

Bottom line: We rocked the house! Plus, I had a blast in my getup and was thrilled when we won the contest. Best group costume, indeed!

So maybe dressing up for Halloween is not my thing. Or maybe it is. I for one, hope we do it again next year. What would we dress as? Hmm. I think Clare and Ashley have already started brainstorming but just in case, got any suggestions?

So how was your Halloween? Did you and your family dress up? Do tell!