Earlier this summer I told you I was dating–for the first time in eons. Well, here’s what you didn’t know. I’ve been dating someone famous! (Actually, this isn’t true, not in the least!)

Or maybe I should say, someone infamous. Really infamous. Cross my heart, hope to die infamous. (Now, this is true.)

Maybe he’s a bit of a lothario. You could say he looks like Don Rickles and even tosses insults like the comic himself. And without a doubt, he’s in a bit of hot water with all kinds of people. Make that boiling water. Even had to check himself into rehab, but he was such a good patient, he ended up doing a two-week addiction program in less than one. Faster than you can say, “Bob’s your uncle!”

If you’re not quite sure whom I’m talking about, here’s a hint: I live in San Diego, a city also known as America’s Finest City. But lately this fair city has been sporting a black eye. Need another hint?

Well, my wannabee man of the hour is none other than,

He’s the guy nearly everybody loves to hate or, at least, wants to see resign from office, on account that he has sexually harassed 18 women—and counting. I mean allegedly. (I’m obliged by my lawyers to say “allegedly” since he hasn’t been tried in a court of law; only in the court of public opinion.)

But whose opinion are you going to believe, anyway? Bob’s or all the women who continue to come forward? As the mayor explains it, he’s just an affectionate guy, willing to flirt and cuddle with any woman, no matter her age, political affiliation or shoe size.

Yet I’m probably the only woman in San Diego he hasn’t made a pass at. So, naturally, I’m taking it personally, and just had to get to the bottom of this to figure out why. What am I, chopped liver? (Yes, I’ve been called this all my life.)

So, after phoning him day and night in search of answers, he finally takes my call. (Not really.)

“Why, Bob, why?” I plead. (Actually, this call never happened, but I’m delusional, so let’s continue with this charade.) 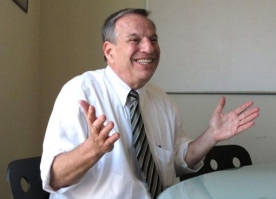 “We met, Bob. (We really did meet–twice!) We shook hands, and then nothing. No passes. No winks. No panting. You didn’t even try to stick your tongue in my ear. What gives?”

“Stop playing hard to get, Bob.”

“Get security!” he yells to someone in the room with him.

“Oh, come on, Bob. Just whisper one sweet nothing into the receiver.”

“Lady, I don’t know you from Adam. But well, okay. What are you wearing?” He asks in a sexy voice.

“Good enough!” I shout as I hang up the phone.

You see? That pretty much sealed the deal and clearly counts as a pass. Which makes us good and dating!

Now, many of you know how my friend, Sherri once said I should consider dating men in prison, the kind who are serving life for knocking off their wives. I even wrote about it, My Men in Stripes. (Thanks, Sherri, for the brilliant suggestion!)

But, I’m thinking, why wait until they get to prison? Why not shop around for the louse now, before he gets 25 to life? Lucky me, I didn’t have to look too far to find my perfect specimen. Oh, Bob.

Which is why, in my estimation, Bob and I are like two peas in a pod.

Though, he’s a handful that one. And by handful, I mean he simply can’t keep his hands to himself. Always trying to canoodle with someone. Why, just yesterday, I saw him make googly eyes at the hundreds of protesters calling for his resignation. And that was after he blew kisses at Gloria Allred.

And though he’s currently being investigated for misuse of city funds—what’s a trip to Paris, among friends anyway?—there’s a certain cache in dating a mayor. That’s why I keep sending him emails that say,

“Bob, you stand by your convictions and don’t let the people bully you out of office.”

I mean, do you really think he wants to stay? No! I’m sure he’s only holding on as mayor for me!

I could be dating America’s Twitter darling, Anthony Wiener, and what kind of a relationship would that be? I mean, there’s a limit to how many times you can look at photos of his junk.

Which is just one more reason why Bob’s the one for me.

And, all I had to do was loosen my values, toss my moral core out with the baby and the bath water, and throw all sense and self-respect out the window. But isn’t it worth it just to have a man I can call my own?

Word on the street is that the pressure’s on for Bob to resign. Let’s just hope I have at least one more day to brag about my new boyfriend, the mayor. What a catch!