I was eight years old when the Beatles entered my life, jolting me awake from my childhood stupor of playing games like, Hopscotch and Simon Says. 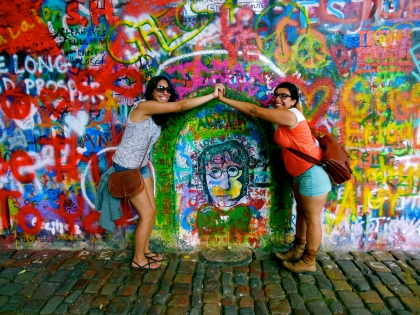 There they were, in all their mop-top glory, introduced to America by none other than Ed Sullivan himself, on his highly popular variety show. Overnight, it was as if I grew up and fell in love. Besides the longish hair, there was the Liverpool accents, the spiffy suits and cool boot wear. Oh, and those dreamy eyes. I was smitten–hook, line and sinker.  Here’s more proof that I love the Beatles:

I saw each of their films in a movie theater in Queens with about, 1,000 screaming girls. My brother and I were the only sane ones in the bunch.

I wore an “I Love Paul” button the size of a moon-pie.

I shellacked my black lunch box with pictures of the Beatles that I had ripped out of Life and Look magazines.

I played my Sgt. Pepper’s Lonely Hearts Club Band album over and over again, feeling as if “She’s Leaving Home” was written with me in mind. I listened incessantly to the album, until I knew exactly where all the scratches on the record were and precisely when the needle would skip just before the end of the song, thus giving “A Day in the Life” the feel of a never-ending anthem.

I went to see John Lennon in concert at Madison Square Garden, and put up with the screechy singing tones of Yoko Ono.

And John, the smart one.  I remember where I was when I heard that John Lennon had been shot. Sitting at the kitchen table with my ex (we hadn’t yet married), having just finished dinner. It felt like an earthquake had hit us, but it was only the intense shock waves that the incomprehensible news had brought us.

I love John. Which is why, when we traveled to Prague this summer, we crossed the Charles Bridge to visit the wall.

The John Lennon Wall, that is. Once used by Czechs to write their grievances, students took it over and began to write messages of peace, love, as well as song lyrics, and tributes to John Lennon.  The wall is a never-ending work in progress. Visitors to the wall can leave their own messages, graffiti or doodles. As a Baby Boomer, it was humbling to be in the presence of such beauty and celebration of our youth ideals of, “Make love, not war.” A reminder we can all use today.

With my trusty camera in hand, I tried to capture the wall, and its visitors, in all its technicolor brilliance. 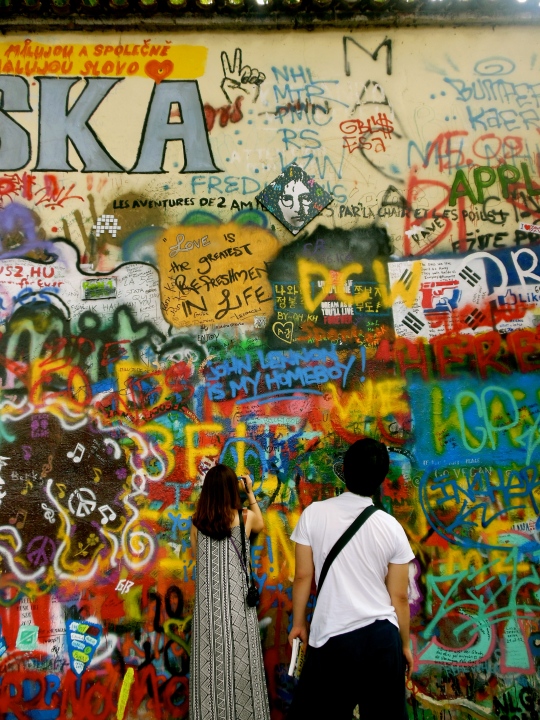 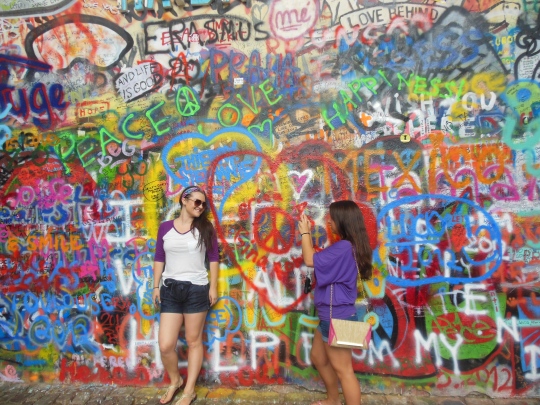 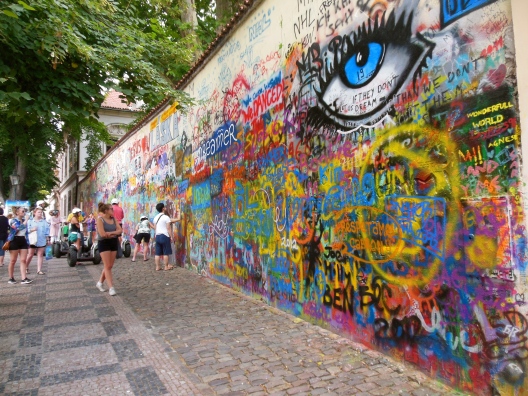 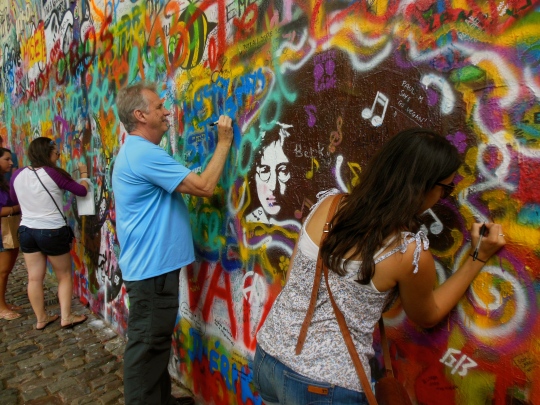 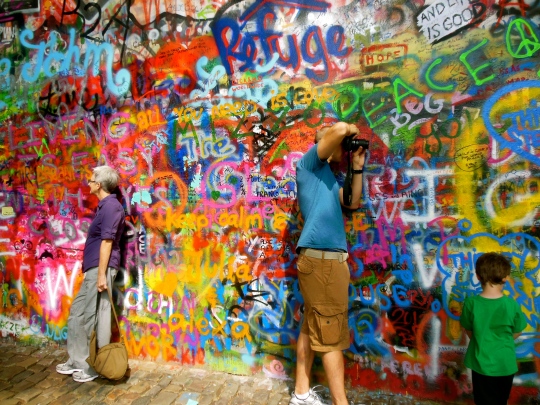 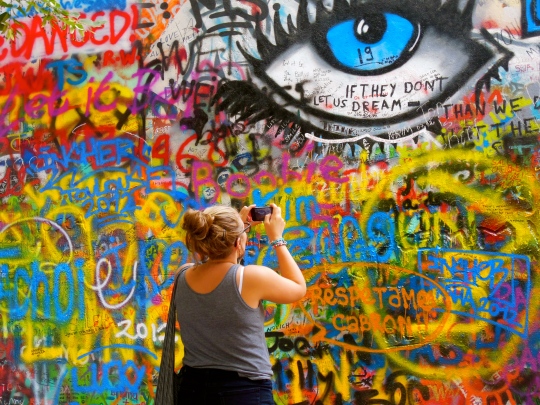 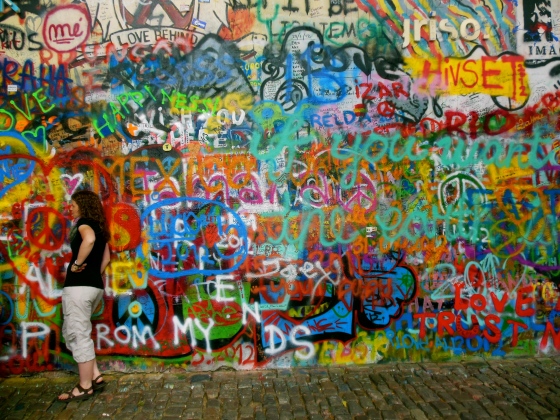 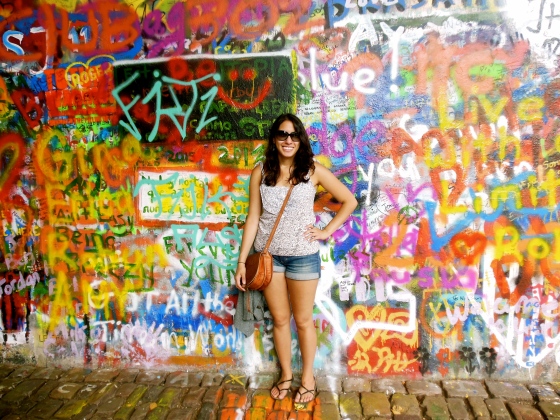 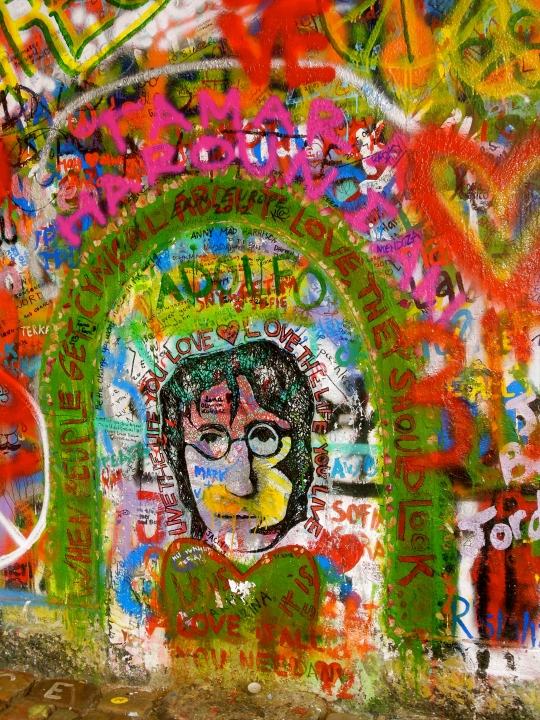 And, what did I write on the wall? Well, that’s a no-brainer:

So tell me, given the chance, what would you write on this wall?