If you ask me, my dog, Henry, is getting kind of uppity.  Sure, he’s a Cavalier King Charles Spaniel, which means he descends from royalty. And, yes, he also expects a certain lifestyle, one befitting a king. Some might even say that Henry is a high-maintenance dog. But that would be an understatement. 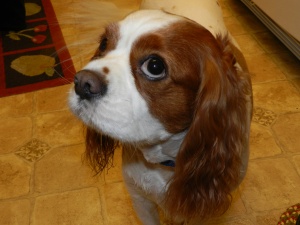 Does this dog deserve a blog of his own? Hmm...

Recently, Henry noticed that there are many dogs out there with a blog, and now he has decided that he wants one, too. But here’s the thing: Henry can’t type to save his life. I don’t know how the other dogs do it, like Lola, Bassa or Uptown Dog. They have great blogs. But, when it comes to typing, Henry is all, ahem, thumbs. I’ve tried to teach him the basics. I figured, if he could type with just one paw, he’d be ahead of the game. But he refuses to even learn, and often ends up just pawing at my desk.

Clearly, this is one dog that cannot learn new tricks. Which is why, last night, during dinner, he asked me to be his secretary.  I nearly choked on my peas.

“I beg your pardon, Sir?” (You need to use words like  “pardon” and “Sir” when addressing royalty.)

Henry then said that what he really means is, he wants me to take dictation for his new blog.  But he doesn’t understand that: 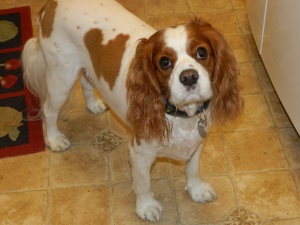 That’s all I could get out him. “Make amazing” what? Crocheted sweaters? Annoyances? And what’s this about losing his dignity? I’ll never know.

So I asked Henry, what he would call his blog if he had one.

“Untangling the Web,” was his immediate reply.

Apparently, he’s under the misguided impression that I’ve been successful with my tangled web of a blog, and so, he wants a crack at untangling it.

“After all,” he added, “Your readers have yet to hear my side of the story.”

His side? “What exactly is your side of the story?” I boldly asked. He shrugged and told me I could read about it in his blog, if he had one.

I then said, “A year ago you didn’t even know what a blog is.” He curtly countered that, a year ago, I didn’t have much of a following, and suggested that it is only when I’ve used photos of him that my readership has seen a spike.

“Not true!” I cried. “You haven’t seen my stats lately!” I then reminded him that he cannot have a blog, simply because he cannot type. To which, Henry said, rather miffed, that it was rather unseemly of me to remind a king of his flaws.

Henry retreats in a huff.

Feeling guilty, I said, “Cheer up, little man. I’m happy to write about you in my blog, now and then.”

He, cheekily replied, it’s the then I’m concerned about. The tall person allows Bassa to blog everyday. With you, I’ll be lucky to get exposure twice a year. I pointed out that he likes Roxy and she doesn’t have her own blog.

Which is when he gave me the stink eye, and retreated to one of his many plush beds, looking a bit despondent.

“Well, Henry,” I said, “Is there anything else you want to add in your defense?”

“Blogs about dogs are trending now, you know,” he said, wagging his tail.

Shaking my head, I went to wash the dishes. Oh, Henry, it seems we are at a standstill.

For a royal dog, he’s quite good at laying on the guilt. In fact, you could say, he’s got me feeling rather sheepish these days. Still, I’m not ready to give in and will have to think about this some more. After all, there’s more than one way to skin a cat.