Some people are just six degrees of separation away from Kevin Bacon. Well, I am six degrees of separation away from just about everyone else. Clearly, that can only mean one thing:  I’m famous! I dare you. Name one famous person—as long as they’re not from a reality show, that is–and chances are, you will find that we are kindred spirits. Odds are, I can show you that we have at least one thing in common.  Here are a few, just to get you started: 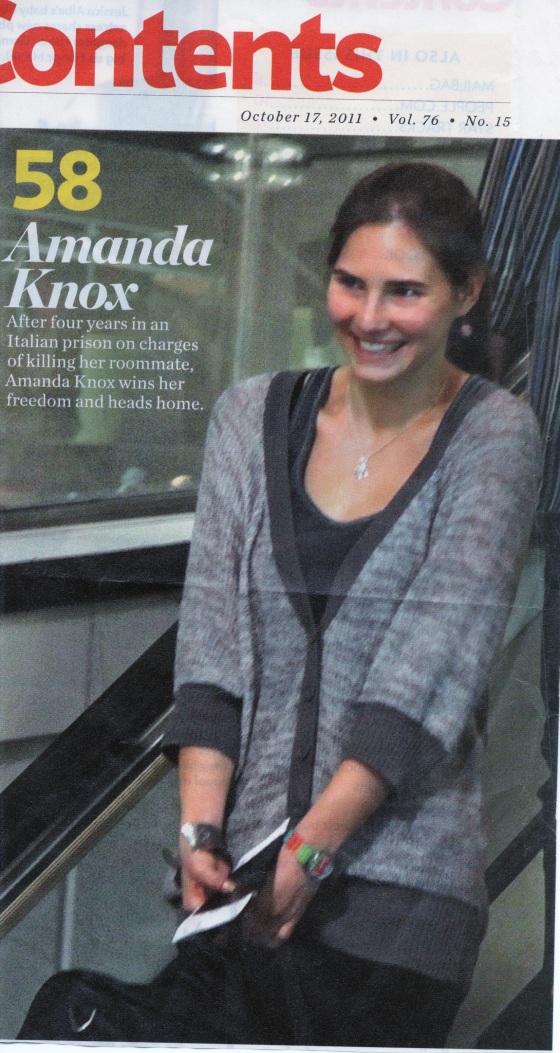 Note the watch. I have the exact, same one! How uncanny is that? Photograph from People Magazine.

Bruce Springsteen:  No brainer. We share the same birthday, September 23rd. Look it up if you don’t believe me! Plus, he’s from New Jersey and I’m from New York. Why that’s practically one and the same, if you ask me!

Amanda Knox:  Now, if you had asked me last month, I would have said, what? Me and Amanda? That’s crazy talk. But, now I know better. That girl and I are two peas in a pod. She’s from Seattle and I lived there once. She spent a couple of years in an Italian prison and I visited Italy once. And we both wear the same Swatch. I bought mine in France during a trip there, and she must have acquired hers while serving time. I’m assuming it came with the prison garb. In any case, do you  see how much we have in common? It’s plain eerie if you ask me.

Steve Jobs and Bill Gates:  These two weren’t particularly fond of each other, but that’s nothing compared to what they both thought about me:  Nothing! They never gave me a second thought, for crying out loud. Nor a first thought, for that matter. It was as if I didn’t exist in their eyes. But here’s the clincher: all three of us were born in the same year. You can look it up if you don’t believe me, but why should I lie? I have nothing to gain, except my six degrees, that is.

Princess Diana:  I wrote a whole blog once on all that the People’s Princess and I had in common. What’s more, she had ties to royalty and so do I, in that, my dog, Henry, is a Cavalier King Charles Spaniel. Which means, he descends from royalty. Need I say more?

Kevin Bacon:  He’s married to Kyra Sedgewick and her show, The Closer, was one of my favorites. Plus, I’m fond of eggs and bacon for breakfast.

Bernie Madoff:  We’re both from New York. He allegedly made investments; I invested a little in stock once. His was a Ponzi scheme, of course, and my investment ended up losing money thanks to the economy. Anyway, Bernie went to prison and I once considered dating men in prison. Sheesh, give me a break. Men in stripes are an untapped dating market, after all.

Brian Williams:  He has a nightly news show, which I watch regularly. He also makes guest appearances on two of my favorite shows (not counting The Closer):  30 Rock and The Daily Show with Jon Stewart. Bingo!

Joy Behar:  Joy Behar is a hoot and I like her a lot.  If I met her on the street, I’m sure we’d be fast friends. We’re both from New York and we both have New York accents, though mine is better. Sends chills down my spine to even think about how alike that makes us.

Courtney Cox:  My name is Monica and she played a character named Monica on some show about relationships. I’m blanking on the name of the show, but, trust me, it was funny. Besides, the character she played was a chef and I spent a whole day working in a McDonald’s while in college, and I’d probably still be there right now if it hadn’t been for an early spring blizzard in May. Plus, her show was on TV and I love watching TV. Enough said.

So you see? I’m just a few degrees away from just about any celeb. Ergo, I must be a celebrity at heart! So, now that I’ve proved I’m famous, how about you? Which personality are you six degrees from?

55 thoughts on “Six Degrees from Fame”