Chapter 9:  Flying the coop didn’t necessarily mean all would be cozy and perfect. After all, this isn’t a story about living happily ever after. Just a series of events, some good, some not so.  The good news? We did find a place of our own that more or less met all our criteria, which consisted of:

•       Could not be located inside Stan’s house or within 50 yards of it, yet should still be close to campus, where we both worked.

•       Preferably affordable and not something for which we’d have to hand over an arm and a leg.

•       Not a dump.  Or a pit, for that matter. Which meant nothing that was falling apart, had holes in the walls, or cigarette butts and roaches ground into some threadbare carpet.

Not quite our tree house, but close enough.

The place we found might as well have been a tree house. It was a secluded duplex apartment, perched on the edge of a cliff and surrounded by evergreens with branches so thick, you couldn’t see the forest for, well, the pine needles. It was small, about 600 square feet, with bird-size windows in the bedroom, and ample, wall-to-wall windows, covering two sides of the living room.  That place should have had a spectacular view, but the trees made it impossible.  Which was probably a blessing, because had there been one, the rental price would have skyrocketed beyond our reach.

There was no natural light in our tree house. Not a speck of sunshine could make its way though the dense foliage. Even at high noon, it looked like nighttime inside. Certainly, would have made a perfect hideout for Jimmy Hoffa. Or, a great place to raise bats. Our only neighbor, a single mom and her 8-year-old son, kept pet rats on their side of the tree house, which, if you ask me, was reason enough never to go visit them.

Our landlord, Scott Woo, was Seattle’s version of a slumlord. He owned lots of properties in the University District and was used to renting to college students, charging exorbitant prices and not giving them any perks—such as cleaning the carpets or repainting before they moved in.  His apartments had seen years and years of partying. You could smell the keg parties, and the faint scent of puke  and sweat, wafting through Mr. Woo’s units and, frankly, Mr. Woo didn’t care.

He had a business to run and that didn’t include coddling his tenants with any niceties. Plumbing problem? So what! Refrigerator not working? Don’t look at him! Mr. Woo believed in empowering his tenants to take charge of their own destinies, which, in this case meant, their own apartments.

Mr. Woo didn’t have an office, but worked out of his car, and kept all his tenants names and phone numbers on his body.  He carried a Bic pen wherever he went and kept his notes on his arms and legs. Inky tattoos, I called them. I assumed, if we looked hard enough, we’d find a copy of our lease on one of his calves or forearms.

So what was the bad news? Three days after moving into our tree house, Joanie and Spock called to say they’d decided to move to Seattle and would be arriving that weekend. Suddenly and out of left field.

Joanie and Spock were G’s friends from college.  They were the kind of couple that had spent so much time together that their looks had melded, making them appear more like siblings than spouses. The only difference between the two was that Spock had pointy ears, which is how he got his name.

They had started dating at the beginning of their freshman year and were married by junior year. They separated senior year—long enough for Joanie and I to plan a female, self-empowerment cross-country trip for the summer. But, two days before graduation, and on the eve of hitting the road, they reconciled. Joanie called to tell me that Spock would prefer she stay at home. 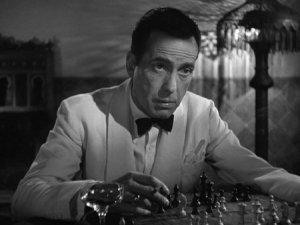 "Of all the gin joints, in all the towns of the world, she walks into mine."

“He needs me,” she added, as if that helped justify tossing all our plans out with the bath water–and the baby.

And so, our trip, that was supposed to enlighten and make us stronger, was thus extinguished, as was my dream of seeing America from the open road. Which also meant I was out the $250 that I had plunked down toward the down payment on an RV, which Joanie ended up keeping.

And now the happy travelers were on their way to Seattle in the RV that I helped subsidize, no doubt using my money to help pay for the gas. I hadn’t seen Joanie–or Spock–since that incident. A lot of thoughts went through my head, but somehow, the only one that stuck was Humphrey Bogart’s line in Casablanca:

Feeling my pulse quicken, I knew that I didn’t want to be anywhere near this gin joint when they arrived.