Ever have one of those days where nothing seems to go right?  Well my friend, Clare, has been having such a day, except her day’s lasted about a year. Yep, if you ask me, Clare has been having a prolonged case of the bad luck blues. Which is probably why I keep asking myself, Why do bad things happen to good people? 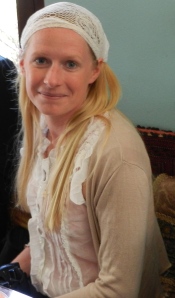 Clare deserves to win the lottery, or a round of Go Fish, to help shake away her bad luck blues.

Here’s where her bad luck streak started:  Last fall, after a night of partying and drinking with her buddies, Clare, feeling a little tipsy, decided to take a cab home.  Turns out the cab driver had friends in low places. As soon as the driver pulled up on Clare’s street, the cab was surrounded by miscreants with ammo.  It proved to be a rather harrowing moment for Clare, who cleverly escaped by jumping out of the car and making a mad dash for her apartment, whereupon she hid under the dining table.

Clare remained under the table while the gunfire ricocheted around her neighborhood. She even managed to call the police, that is, once she was able to pry apart her fingers, which had been tightly wrapped around her cell phone. When the police finally arrived, that’s where they found her–tucked underneath the table in a fetal position.  Way to go, Clare!

This episode was followed by a less terrifying one, when a lady with blue-haired dreadlocks, who clearly was not paying attention, drove her car smack into the door of Clare’s car, just as she was disembarking from the driver’s side. This knocked Clare for a loop and the car door to the ground.  As providence would have it, the dreadlock lady was not insured. Adding insult to injury, the entire door had to be replaced.

Several weeks later, on a dark and stormy night, Clare’s apartment was broken into and, among the things stolen were Clare’s jewelry, perfume, one of her stereo speakers, and all her craft supplies, right down to her knitting needles. Oh, and all of her makeup and electric toothbrush, too. Talk about a bizarro robbery! Was this the work of a 20-something woman, about to move out on her own? She must have been thinking,

“Why shop at Bed Bath & Beyond, when you can do one-stop shopping at Clare’s?”

Super-sleuth Clare later discovered a speaker, exactly like hers, for sale on Craig’s List. “Jackpot!” she cried, as she made contact with the seller to catch them at their own game. The police even helped set up a sting operation to get her goods back, but this turned out to be a false alarm, and Clare wasn’t able to recover any of her stuff. Disappointing? Yes, though I’m not really sure Clare wanted her toothbrush back.

Turns out, the robbers weren’t finished with Clare. Unbeknownst to her, they had one more thing of hers—a set of car keys.  Clare had not noticed the keys missing, so was caught unawares a few nights later when (you guessed it), they came back for the car.

Bad luck is supposed to come in three’s, but in Clare’s case, it’s coming in about three dozen’s, give or take a few. Many a friend has tried to tell Clare that it’s time to read the writing on the wall, and get the hell out of dodge. Either that, or pack up the rest of her belongings and leave them on the curb, so that the burglars can collect what they missed the first couple of times.

But Clare loves her neighborhood and its bohemian atmosphere, so she has no plans to budge. Through all of these frightful incidents, she’s remained good-natured and sweet as sugar snap peas in July.  She thinks this string of unfortunate incidents is a passing fancy, but I have two words for her:

Neighborhood Watch!  (You can read about mine–its successes and failures, here).

So what do you think? Any advice for Clare? Can you top her run-in with the bad luck blues?

61 thoughts on “The Bad Luck Blues”