The night before my mother, Mary, died, she was packing for an impromptu trip to Caracas to visit her mother. My brother, Cesar, tried to talk her out of it. She should stay home where she was needed, he said. He even tried to call me to see if I could talk sense into her, but I wasn’t home and this was at a time when most folks still didn’t own a cell phone.

Cesar kept trying to rationalize with her but it was to no avail. For my mother had a bee in her bonnet and nothing could dissuade her. She was a woman on a mission and the fact that her mother was long dead simply went over her head.

Blame it on Alzheimer’s. We were sure she had it, though 16 years ago, the only way to officially detect it was through an autopsy. So, without a definitive diagnosis, no doctor could tell us for certain. But we just knew. Here’s why: 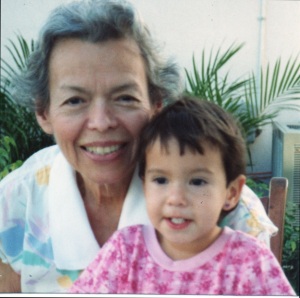 Florida, 1992: My mother poses with my daughter, despite not remembering that she is her granddaughter.

1) She was forgetful. Two years earlier, I’d gone to Florida with my daughter to visit my parents in their new home. My mother took one look at my 18-month old and asked me why I had brought this strange child with me. This, from the woman who cried with joy at the sight of her infant granddaughter, and who sat with me in the hospital hours after her birth.

Later, while at the kitchen window that looked out to the backyard, we watched my father push my child on a swing. My mother turned to me and asked,

“In what year did your father die?”

Startled, I had to think for a second. Random thoughts began to whirl in my head. Was my father dead? Who, then, was this impostor outside with my daughter? How did it come to this and where did my mother go? My mother, who never forgot a birthday and who always remembered to serve up my favorite dishes when I visited. Why couldn’t she see that the man she’d been married to for over 40 years was still alive—and just a few feet away?

2) She lost her bearings. After the move to Florida, my mother was no longer in the comfort of her Long Island home and all that had been familiar. She was instead like a planet spinning out of control, without the gravitational pull that had once kept her firmly connected to us. As far as she was concerned, Florida was alien turf and light years away from New York, where she had spent most of her life. She might as well be living on Mars.

During our visit, I took my mother and my girl to a nearby playground. I strategically positioned my mother on a bench, where I could keep an eye on her while playing with my daughter on a jungle gym, just a few yards away. My mother seemed relaxed at first, like her old self and for a moment I could pretend there was nothing wrong. As long as she didn’t utter a word, she was the mother I remembered. But a second later, my child said something, causing me to look away. Then, I heard a cry, and just like that, my mother was in a state of panic, anxiously searching for a way out of the park and nearly in tears because she could not find one. I picked up my daughter, did my best to calm my mother, and quickly guided them both out of the park. I wondered whether we could ever have a normal outing again.

3) She was mean and disorganized. Naively, I thought I would help my mother organize her closet, which looked very helter-skelterish, if you ask me. But instead of helping, I made things worse. Her eyes bored into me as she vehemently admonished me for touching her things. Alarmed and slightly shaken, all I could think was, this is not my mother. My real mother clearly had been kidnapped, replaced by mysterious pod people, and was now starring in her own movie—“Invasion of the Body Snatchers.” Alzheimers, 3; Mary, 0. The disease was winning and gaining in on my mother.

So the night that Mary tried to return to Venezuela to see her own mother, she packed her suitcase as best she could and went to bed. Perhaps exhausted from arguing with Cesar or frustrated that she wasn’t able to embark on her journey. Or maybe she just forgot she wanted to go. I don’t know. I wasn’t home when my brother called. It was Memorial Day weekend and I was out at a barbeque with friends.

The next morning, my sister called with the news. Brain dead, she said, which to me sounded hopeful in some off-kilter way. Not completely dead, just brain dead. Later, it would fall on to us, her children, to pull the proverbial plug.

My mother. Somehow I believe she knew the end was near. Which is why she spent the night before, packing her bags to see her mother. As for the autopsy report, it gave us the confirmation we needed: Alzheimer’s Disease.

14 thoughts on “My Mother’s Memory”